It was very discomforting to see 60 Minutes correspondent Steve Kroft assume the role of inquisitor of WikiLeaks Julian Assange. In taking on Assange, Kroft defended government secrecy and implied that WikiLeaks is out to get the U.S. 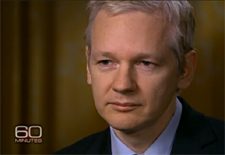 CBS News used to challenge the U.S. government, taking pride in its role as a proud and leading member of the Fourth Estate. It was CBS ground-breaking 1982 documentary, The Uncounted Enemy: A Vietnam Deception, narrated by the sainted Mike Wallace, that led to a high-profile legal battle with General William Westmoreland, former commander-in-chief in Vietnam.

The program charged Westmoreland purposely underestimated Viet Cong troop numbers in 1967 to keep solider morale high and domestic support for that dubious war in place. [That alleged deception was a forerunner to George Bush IIs claim of Iraqi weapons of mass destruction.] If Westmoreland did, in fact, short-change enemy strength, countless soldiers died in order to protect the reputation of military brass.

Westmoreland sued the Tiffany Network for libel and $120M, but then mysteriously settled for an apology. There was much speculation that he settled after two of his intelligence officers backed CBS during testimony. Others said Westmoreland, as a public figure, was hard-pressed to prove that CBS acted with malice. The case ran to 1985.

Assange is a shoo-in for this months John Peter Zenger Freedom of the Press Award from odwyerpr.com.

Undeterred, Steve wanted to know if Julian is setting a dangerous precedent. He pointed out that some people fear that if WikiLeaks gets away with it this time around, it may publish even more damning information in the future.

Assange answered: If were talking about creating threats to small publishers to stop them from publishing, the U.S. has lost its way. It has abrogated its founding traditions. It has thrown the First Amendment in the bin. Publishers must be free to publish.

Assange believes hes acting in the spirit of Thomas Jefferson and James Madison. Id add Mike Wallace to that list.

Krofts interview is a reminder about how Big Media is in bed with Uncle Sam. The once-proud Tiffany Network is looking more like Wal-Mart these days.