Fashion brand Kenneth Cole is taking its lumps after sending out a tweet yesterday (since removed) that appeared to make light of the protests in Egypt.

"Millions are in uproar in #Cairo," read the Twitter dispatch, apparently from Cole himself, the chairman and chief creative officer for the company. "Rumor is they heard our new spring collection is now available online at [website] - KC." 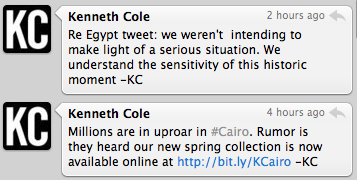 After getting bombarded with criticism, KC dispatched another tweet, two hours later: "Re Egypt tweet: we weren't intending to make light of a serious situation. We understand the sensitivity of this historic moment -KC."

"I apologize to everyone who was offended by my insensitive tweet about the situation in Egypt. Ive dedicated my life to raising awareness about serious social issues, and in hindsight my attempt at humor regarding a nation liberating themselves against oppression was poorly timed and absolutely inappropriate."

As you'll see in the first comment after his apology and others that followed, the damage was done.

The episode has sparked a mock PR feed for KC -- @KennethColePR -- in the tradition of BPGlobalPR and others, in addition to global digital scorn. The Associated Press even called the comment "an epic Twitter fail."

Weber Shandwick senior VP George Snell seems more forgiving than most in saying KC did the right thing and apologized.

"Making light of a deadly serious situation that can change the course of history in Africa and the Middle East to promote leather loafers is rather boorish and insensitive," Snell blogged. " But likely Cole did want many of us do  fired off a tweet that he thought was funny. In hindsight, he realized that he had stepped over the line of good taste so he deleted it and apologized."

"Wading in on a serious news story requires relevance and tact; otherwise its tackily opportunistic at best and incredibly offensive at worst," she blogged. "And if you do get caught out, own up and learn from your errors  or you could always blame the intern."

Babak Zafarnia, who heads Praecere PR in D.C., offers 3 tips for getting out of such a mess, only one of which KC appears to have heeded:

1) Issue an immediate tweet that offers a very direct, strong, and sincere apology. No stupid tap dancing around this issue.

2) Your company already has a blog devoted to social responsibility. Immediately post an explanation about how this tweet came about in the first place, and explain the steps the company will take to make sure something like this never, ever happens again.

3) Get in front of the camera on this with a YouTube video and have your company leadership talk directly to the public about the mistake and corrective steps.


There are also signs that the crisis could take on a life of its own, as evidenced by this prank at a KC store: 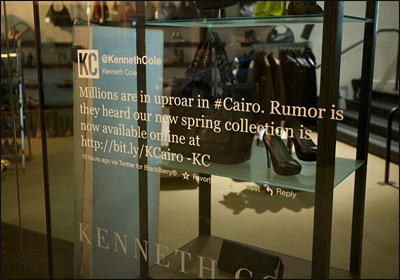 ... and this sign that the flap has entered the zeitgeist: