President Obamas handling of the Egyptian revolution deserves tough scrutiny, especially for the ill-advised decision to dispatch Frank Wisner, former U.S. Ambassador to Egypt, as his personal envoy to the embattled Hosni Mubarak. 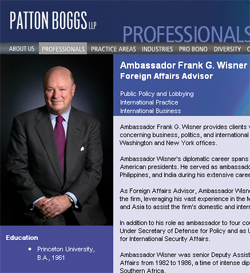 In a fawning Feb 2 profile of Wisner, the New York Times depicted him as a swashbuckling, bald, barrel-chested, martini-drinking career diplomat who is well-known in foreign policy circles but not beyond them.

Reporter Sheryl Gay Stolberg barely mentioned that since retirement from the foreign service in 1997, Wisner served as vice chairman of American International Group, leaving in '09 just as the company was getting bailed out by American taxpayers to join the lobbying firm of Patton Boggs.

Thats right. Obama dispatched Wisner, who is the same guy that one of Washingtons top lobbying firms proudly calls its foreign affairs advisor for public policy and lobbying, international practice and international business.

Wisner, according to PBs website, plays a pivotal role at the firm, leveraging his vast experience in the Middle East, India, Europe and Asian to assist the firms domestic and international clients. Talk about a potential conflict of interest. For a potential double-dip, Wisner also served as a senior diplomat in Tunisia, the place that kicked off the current Arab upheaval.

Wisners mission didnt pan out in light of his comment that continued leadership of his old buddy Mubarak is critical, its his opportunity to write his own legacy. The State Dept. and Wisner now say that comment was made in a personal capacity, one that doesnt reflect U.S. policy. That backtracking is a little too late. Courageous Egyptians demonstrating in Tahrir Square dont give a fig about Hosnis legacy. They believe rampant governmental corruption will begin to end only when Hosni goes packing.

The Independent of London's Robert Fisk blasted the use of Wisner for his business link to Egypt. He interviewed Nicholas Noe, a former aide to Secretary of State Hillary Clinton, who sees it as a sign of the U.S. privatizing is diplomacy.

This blogger is not a big fan of the Tea Party movement, but the Wisner episode indicates that Team Obama relied on one czar too many to run the White House. Cant U.S. Ambassador to Egypt Margaret Scobey handle Mubaraks government and forge relationships with key opposition leaders?

The State Dept. acknowledged for the first time (Feb 2) that Scobey spoke with Nobel Peace Prize winner and opposition leader Mohamed El Baradei. What was she waiting for?