Russia is spending millions for PR, largely at Ketchum, to promote the state as one dedicated to rule of law, transparency, political reform and economic development. 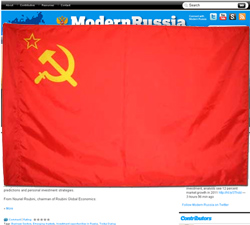 President Dmitry Medvedev boasted to the swells at Davos on Jan. 24 that his country is open for business. Ketchum maintains the Modern Russia website, which champions the country as a paragon of innovation and investment.

Actions, however, speak louder than words.

The British paper called Harding and correspondents throughout the world to London to review the trove of WikiLeaks material that was relevant to their respective beats. Hardings batch was a doozy.

They called Putin Russias alpha dog and dismissed Medvedev as Robin to his Batman. Alpha dogs should be able to withstand criticism.

Harding, who also co-authored the Guardians WikiLeaks: Inside Julian Assanges War on Secrecy, didnt receive a heros welcome when he tried to return to Russia on Feb. 5 after his two-month London sojourn. Instead, he got the boot. Harding was refused entry, put in a cell for about an hour until the next available London-bound plane.

Officials said Hardings name was on a list of undesirables, but claim the expulsion had nothing to do with WikiLeaks. A security officer simply said, For you, Russia is closed.

The Guardian fears a retreat from press freedom. In a Feb. 8 editorial, the paper notes that Hardings expulsion is unprecedented since Soviet times. It did believe the Soviet Unions ways of controlling and managing the international press had disappeared for good in the new Russian Federation, but now feels the old ways have gradually returned.

Pravda, the mouthpiece of Russias government, blasted the Guardian and the entire British media for an obsession with the Cold War. It then launched a Cold War era diatribe against the U.K. scribes and the troupe of guttersnipes positing as journalists, who make a living shaping public opinion with a carefully managed mish-mash of hogwash, balderdash and poppycock, collectively having a thing about Russia. To them, Russia is a constant source of negative images, ranging from vapid lies about corruption, idiotic and totally unfounded references to a mafia state and blatant slander and libel against the legitimately elected authorities.

The editorialists wrath is misplaced. His sewer press didnt cook up WikiLeaks. It was but the messenger. Seasoned members of the U.S. foreign service wrote the revealing cables.

Modern Russia needs a more modern idea of freedom of the press. It also should thicken up its skin.

Old-time Soviet press bashing is a thing of the past in the age of the web.