This reporter is vacationing in Miami but one of the things we quickly noticed was the toll insanity that has gripped this car-choked area.
Our cab to northern Miami on I-95 zipped along while four lanes of traffic on our right were barely crawling and it was only 3:30 p.m.  not even rush hour.

The cabbie explained that he was driving on the toll road of Express I-95 while adjacent toll-free I-95 was being used by drivers who wanted to evade the toll.

At 3:30, it was only $1.25 but it could go as high as $6.20 since this was one of the new variable tolls that change depending on how crowded the free roads are, the driver explained.

We were reminded of an idea reportedly floated at Coke a few years agothe price on Coke vending machines would go up with the temperature.

You cant blame us for being astounded at the inanity of Florida since all tolls were removed from our home state of Connecticut in 1988 as wasteful of gas and time, costly in terms of the bureaucracy needed for tolls, and self-defeating.

The tolls did just what they are now doing in the Miami areadriving cars to free roads which become more and more clogged. 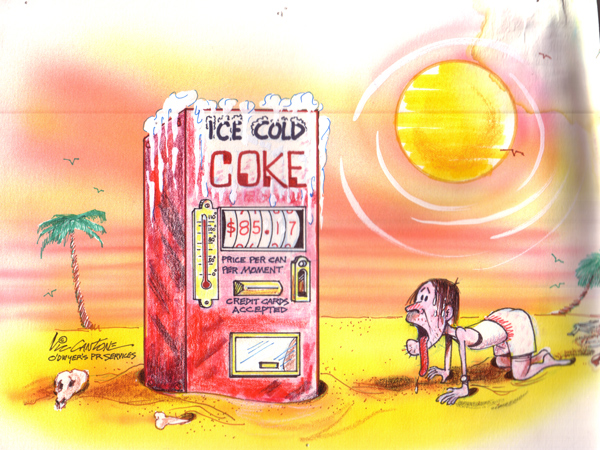 Most equitable form of tax collection is the one on gas since it would make all roads toll roads and charge everyone according to use. It would be a single-payer plan of the type sought in health insurance.

Politicians at both the federal and state levels dont have the guts simply to raise taxes on gas, registrations and drivers licenses.

The federal gas tax is only 18.4 cents a gallon and hasnt been raised since 1993. The American Trucking Assns. and a coalition called Americans for a Strong National Highway Network are solidly against tolls.

Cash-starved states are looking at such deals because they generate immediate large piles of cash as opposed to gas and other taxes that come in over a period of years.

New York is exploring such a deal to raise $16 billion to refurbish the Tappen Zee Bridge.

An illustration of the high costs of toll roads is the eye-popping pay of execs of Pocahontas 895, an 8.8-mile toll road outside of Richmond.

Although Pocahontas 895 took in $11.8 million in the year to June 30, 2010 and lost $15.7M, Transurban North American president Michael Kulper took home $2.3M in both 2009 and 2010. He has other duties besides 895 since Transurbias activities in the U.S. include building High Occupancy Toll (HOT) lanes on the Capital Beltway in Virginia.

Thenewspaper.com, which has blown a gasket over the high pay of Transurban execs, said the top six North American execs took home $34.6M in pay and other benefits in 2007.


Transurban to Us: Drop Dead

We sent our lengthy, statistics-laden blog of Feb. 7 and a number of questions to U.S. VP-corporate relations Jennifer Aumont and new PR person Mary Ellin Arch, who was the subject of a feature in the Jan. 7 New York Times on how she was doing in her first PR job.

We had reached Aument by phone but she was in her car and instructed us to e-mail questions.

Dozens of other questions came to mind.

Transurban has a New York office at 589 Eighth Ave. at 39th St., which is four blocks from our office. We called that office and suggested we come over there or someone come to our office so we could go over all the facts and finances of Transurbia. The person who answered the phone at that office wouldnt even tell us what street 589 Eighth Ave. was at.

Aument blew us off with a one-sentence e-mail that linked to the financials of Transurban, which was something we already had.

This is a common PR response these days. Get thee to the website and dont come back.

Reporters today must often work with no cooperation from PR depts. But with so much available on the web, that just leaves more time for research.


News Background Not Good for PR

Arch told the NYT that she was unusual as a journalist in that I never hated PR people.

Her feelings now after working in PR are that, Im a real big fan of telling reporters its not as easy as you think. Working in the newsroom does not prepare you for a job in PR.

Another quote was, I certainly dont miss working in the journalism that exists today.

Writer Cecilia Capuzzi Simon interpreted this remark to mean fretting over the future of the business and hanging on to a fading career.
Arch doesnt sound enthusiastic about what she must do now which is duck reporters questions.

We can assure her bosses that she has given us absolutely no help whatever and neither has Aument. That will win a lot of points for both with management.

Working in a newsroom used to be considered the best preparation for a job in PR.

One reason journalism has problems is that that there are a lot of Mary Ellin Arches who are unable to provide access to news sources and who give little, if any, help to inquiring journalists.

There are currently about 240,000 PR specialists to about 50,000 reporter/correspondents, according to the U.S. Bureau of Labor Statistics.