The Clorox Company this week said it would take its disclosure of U.S. and Canadian product ingredients a step further by listing all preservatives and dyes, an extension of a move three years ago to list the products' active ingredients. 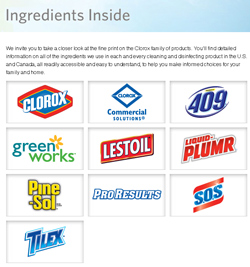 It follows S.C. Johnson's pledge last year to do the same for its products by 2012 and comes amid increased competition from "green cleaners" like those made by Seventh Generation and Method, the latter which has encouraged consumers to push a Congressional bill requiring cleaners to list all ingredients on a label. A lawsuit to force the issue is also winding its way through the courts.

Fast Company's Ariel Schwartz wondered whether Clorox's move is a "greenwash" or corporate transparency at its finest, but she gives the company credit for putting more information, even listing some ingredients that are potentially harmful.

"It's not as if Clorox is revealing its ingredients because it has nothing to hide," she wrote. "In fact, some of its products contain potentially toxic compounds."

The 98-year-old Oakland, Calif.-based Clorox, which lined up an endorsement from the Sierra Club with the move, also said it has started putting a note on all product labels directing consumers to its CSR website -- CloroxCSR.com -- where the ingredients will be listed as part of a program it calls Ingredients Inside.

Clorox, which fell just short with its Q2 earnings this week, says it was the first consumer packaged goods company to launch a "product ingredient communication" program in North America in 2008.