Although Florida International University itself has yet to say whether accused rapist Garrett Wittels should be able to play baseball this season, the student media has come out strongly in favor of keeping him on the bench.

Media attention from having a player under investigation for rape charges would eclipse any victories the team could accomplish, said an editorial. 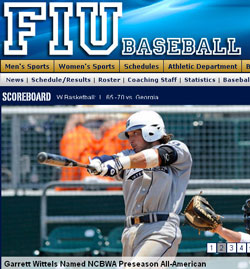 Wittels admitted he had sex with a woman described as a 17-year-old while vacationing at the Atlantis resort in the Bahamas but says it was consensual. He was arrested along with two other FIU students on charges of rape after the father of one of the two young women involved made a complaint.

The women were under the influence of an as yet undisclosed amount of alcohol. Blood tests were taken.

National attention has focused on Wittels and FIU because he has hit in 56 straight baseball games, two short of the college record.

FIU coach Turtle Thomas told the Miami Herald Jan. 27 that Wittels is being allowed to practice with the team but has yet to decide whether he will let Wittels play in the opening game Feb. 18 vs. Southeastern Louisiana. ESPN3 will cover the first game.

What is unusual about this story is the almost complete absence of national coverage. After nearly a month and a half, the New York Times has yet to print more than a brief, AP-originated paragraph on the alleged rapes.

Rape charges against three lacrosse players at Duke University in 2006 resulted in hundreds of thousands of words of coverage starting within days.

The Bahamian police have kept a tight lid on details of the Wittels charge. They told this website that details of the charges could only be revealed with the permission of the family. Wittels law firm was asked for such permission and said it would seek it. The permission was not given.

The Beacon editorial noted that Middle Tennessee State University suspended two baseball players after they were charged with rape in December 2010. Both players admitted to sex with an 18-year-old who had been under the influence of alcohol.

MTSU immediately removed them from the baseball team once the information came out, said the Beacon. We believe MTSU set the best example on how matters like this should be handled, it added.

If FIU declines to take action, we feel it would be keeping a dark cloud over the reputation of the Athletics Dept. in addition to setting a horrible precedent for incidents of this nature in the future, said the Beacon.

Fernando Figueredo, head of PR of FIU, did not return phone calls or e-mails on the status of Wittels. He is a former New York PR executive who worked at Porter Novelli among other places.

The latest statement of FIU was given to the Miami Herald on Jan. 27 by FIU coach Turtle Thomas who said Nothing has been determined at this point on whether Wittels would be allowed to play or not.

He said Wittels was being allowed to practice with the team.

Said Thomas: Always remember something: in this country, youre innocent until proven guilty.

Rosanna Fiske, chair of PR Society of America, is an assistant professor in the FIU School of Journalism and Mass Communication. It is headed by Dean Lillian Lodge Kopenhaver.

The school was criticized in an April 15, 2010 article in miaminewtimes.com entitled, FIUs Journalism Program Is a Mess.

The Bahamian court has set April 18 as the first date for a hearing on the charges.