As the fires of Egypt's revolution give way to a path toward new government, two sectors of the country's economy are eying a return to the status quo -- PR and tourism. 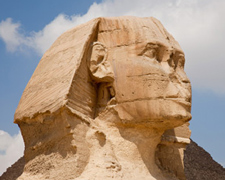 Egypt counts on nearly 15M visitors each year to prop up its tourism sector, which accounted for $13 billion in revenue in 2010.

Tour guides rallied on Monday at the inconic Great Pyramids and Sphinx for a PR exercise to leverage Valentine's Day with a message "Egypt loves you."


The guides -- whose business has been badly hit by the crisis -- gathered at the plateau site, celebrating St Valentine's Day with banners in English, French, Russian and German reading: "Egypt loves you."

Behind them a handful of Egyptian visitors were at the site, but there were no foreigners to be seen and Cairo's hotels and gift shops stand empty.

"We need to make tourism come back to Egypt. We want to send the message to tourists all over the world that they are welcome here," said 27-year-old Hossam Khairy.


A U.S. State Dept. travel warning issed on Feb. 6 continues to loom and, as USA Today reports, tour companies have canceled departures through at least February. The paper noted a U.S. Tour Operators Association poll from Friday that found nearly half said it was too soon to tell when they would resume trips to Egypt.

The U.K. has eased a bit off its travel warning, but continues to advise against all but essential travel to major cities.

The PR sector's coping with the protests and aftermath, meanwhile, were the focus of a Daily News Egypt piece on Sunday, which found an industry trying to get back to normal.

A lot of our work and deals that were set to kick off at the beginning of the year have now been put on hold indefinitely due to the uncertain business environment right now, said Sherry El Kilany, founder of Nineteen84 in Cairo.

But others are more optimistic about the changes coming to Egypt.

We were recruiting before protests for employees and we are still recruiting now after the protests so it hasnt affected our employees in any way, said Adel Elbendary, managing director of Fourth Dimension PR, who added that business growth thrives under democracy and was not growing to its full potential before under "monopoly."