Talented Thomas Frank -- ex-Wall Street Journal house liberal and author of Whats the Matter with Kansas? -- believes the main purpose of PR is to keep American working stiffs in their place.

In the March Harpers, Frank wrote that PR has an elitist contempt for the public mind. Its role is to manage the mob. PRs founders are a rogues gallery of propagandists, the sort of people that lefties love to hate. 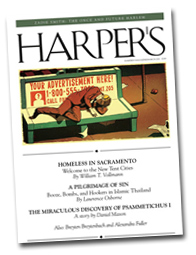 Ivy Lee is dismissed as a flack for the Rockefellers back in their robber baron days and George Creel is written off as Woodrow Wilsons cheerleader during the WWI.

Special disdain is held for Eddie Bernays, the father of PR. [Full disclosure: two thank-you notes sent from Bernays are somewhere in my ODwyers files.] Frank refers to Bernays 1928 classic, Propaganda as odious. He casts Bernays as chief engineer of United Fruit Co.s 1954 coup in Guatemala.

Frank believes many lefties fall for PRs PR, a business that consists of a powerful and manipulative elite, or as Bernays put it: PR is an invisible government which is the true ruling power of our country.

Frank makes a strange bedfellow with right-winger Glenn Beck, who blames Bernays for transforming America from a land of sunshine and light to cutthroat Consumer Nation, where the ultimate goal of life is to buy lots and lots of stuff.

In his book, The Overton Window that was published last summer, Beck presents evil PR genius Arthur Isaiah Gardner, who believes democracy in the U.S. has failed and plots to manipulate public opinion for an ultimate coup of the super-elite. Gardners son mimics Bernays when he says, PR is the scientific engineering of consent.

The National Association of Manufacturers hit PR gold when it successfully linked free enterprise in the public consciousness with free speech and free religion as the integral parts of democracy. Frank points out Beck revived that argument when opposing the 2009 re-regulation of Wall Street. "This isnt a debate about money, its a life-and- death struggle for personal freedom and national liberty," said Beck.

The same spin is happening right now in Wisconsin, where middle class public service employees are vilified as thieves, while tax breaks are promised for businesses and investors who put their money into Badger State-based companies.

Becks book warns of a controlled media all lined-up and ready to carry out their PR campaign and a mind controlled public ready to turn to anybody who says hes got the answer. That sounds like Fox News, his network home.

Fox is the only cable network that is controlled by a former PR man, Roger Ailes. As Frank notes, the best PR works by denying its PR-ness, by projecting its own sins onto the hated other.

That's right out of Ailes playbook.