Bully for WPP chief Martin Sorrell, the pride of Ireland. One of the pleasures of working in the ad/PR media business is to review the commentaries that Sorrell submits with WPP's annual report and financial statements. [Sir Martin has assured me that he writes the stuff himself.] He did not disappoint last week. 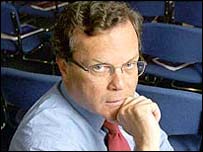 Sorrell tackled "negative growth," an unfortunate term that was bandied by PR firms and suppliers way too frequently during the Great Recession. Sorrell wrote:

I put Sorrell in the same league as Berkshire Hathaway maestro Warren Buffett, whose annual report is an must-read read in financial community and a strong indicator of the upcoming year on Wall Street. Move over, Warren. Here comes Sir Martin.

Sorrell wrote: "We entered 2010 with fingers crossed. There were few certainties. Little could be taken for granted." There is a big certainty: whenever Sorrell sits down at his writing desk, he is going to deliver a literary gem in the greatest tradition of his adopted home, the Emerald Isle.

I hope financially battered Ireland can afford to continue to host WPP.