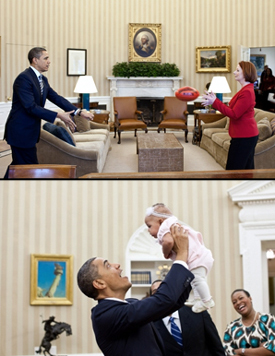 Whats wrong with this picture?

Either the normally savvy White House media machine is having a bad week, or the President is as detached from world events as some of his critics say he is. Take today, for instance.

Even worse: the White House email that featured the baby has "Commander-in-Cute" in its subject box.

Thats way too cutsey for me.

Meanwhile, the president and first lady today hosted the first-ever White House Conference on Bullying Prevention to address the challenges posed by bullying.

The conference drew about 150 people who heard the president declare bullying is not just a harmless rite of passage or inevitable part of growing up.

That may be true. The world, however, would rather hear whether the U.S. is going to put a no-fly zone over Libya or tap its strategic oil reserve, than advice from Obama on how to stick up for yourself against a bully.