FIU should have suspended Garrett Wittels says a headline on a column by veteran Miami Herald sportswriter Linda Robertson.

Robertson, with the paper since 1983, has added her critical voice to that of ESPN, which was amazed that the college baseball star was allowed to play on Florida International University's baseball team Feb. 18 while rape charges were hanging over his head, calling it ridiculous.

The AP, covering the game, interviewed Wittels after his 56-game hitting streak was broken and got him to admit that he lied to the umpire about being hit during one of his at-bats.

Instead of taking first base, he was allowed to continue at bat. He later said he thought his hand had been broken. He could not explain what suddenly made him lie to the umpire.

Robertson said Wittels should not have been allowed to wear the FIU uniform on national TV.

FIU should have kept him off the field until more light was shed on the case, she wrote.

Calling that reasoning flawed, Robertson said it is the duty of a judge and jury to presume innocence during a trial or hearing but standards outside of a court are different.

A politician who resigns while facing corruption charges isnt innocent until proven guilty, she wrote.

New York Times coverage of Wittels and his streak was extensive until he was hit with rape charges.

He and two other students of FIU were arrested on Dec. 20, 2010 after admitting they had sex with two 17-year-old women who had been drinking in an Atlantis bar in the Bahamas.

Times reporter Karen Crouse, in a lengthy article June 2, 2010, said the Wittels streak has been a ray of sunshine for FIU after the fatal stabbing of football player Kendall Berry on campus March 25. That had cast a pall over the athletic program, she wrote.

Crouse wrote that Because of Wittels, the country is seeing FIU baseball in a positive light. No matter when his streak ends, it is, for the University, the start of something good.

There have been only two brief mentions of the rape charges and both were AP pickups  the first on Dec.28 and the second on Feb. 19 after the streak ended.

The paper covered extensively the dismissal of Brigham Young basketball star Brandon Davies in late February after he was accused of breaking the BYU honor code by indulging in premarital sex. Honor Code Separates BYU from Other Teams, said the headline on a story March 2 by NYT reporter John Branch.

NYT coverage of rape charges against three Duke athletes in 2006 totaled hundreds of thousands of words.


Atlantis, NYT Advertiser, Gets an F 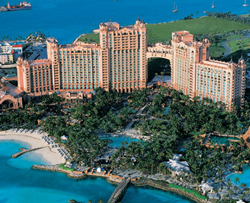 The Atlantis Resort & Casino, where the alleged rapes took place, is a major advertiser in the NYT, spending millions each year. It frequently runs full-color ads in the front news section at a cost of about $130,000 each.

Duke did little, if any, advertising with the NYT.

The legal drinking age in the Bahamas is 18 and the two alleged victims of the rapes were 17, according to sources quoted by the Miami Herald.

The Better Business Bureau gives the Atlantis an F, its lowest rating. It says the Resort failed to respond to eight of the ten complaints against it. BBB said it does not have sufficient information to determine the size of the business nor can it obtain sufficient background information on this business.

PR staffers at Kerzner International Resorts, which operates the Atlantis, have not responded to e-mails or phone calls by this website.

Dr. Michael Wittels, an orthopedist who is the father of Garrett, told the AP Dec. 29 that the two women described themselves as being students at the University of Arkansas.

A preliminary hearing on the rape charges is set for April 18 in the Bahamas.

The March 7 SI said the six-month investigation showed that more than 200 of the athletes, including 23.5% of the scholarship athletes on one team (Pittsburgh), have been in trouble with the law.

Some schools ignore such backgrounds, feeling that ignorance is bliss when it comes to knowing a players arrest record, said the article.
Jeffrey Knox, a freshman back for Pittsburgh, was removed from the team after being arrested on charges of punching a female student and two female witnesses on Sept. 22, 2010.

Knox, who has denied the charges, was to be arraigned March 3 on charges of simple assault, disorderly conduct and reckless endangerment. He was the fourth Pitt player arrested on charges of violent crimes between mid-July and late September, 2010.