There's very good news in PR these days -- at least in the independent counseling end of the industry.

While only 15 of the 50 largest PR firms reporting their 2009 figures to this website had gains, with only five up in double figures, the picture was dramatically reversed for 2010. Forty-one of the top 50 reporting firms were up in 2010 and 25 of them had double digit gains. 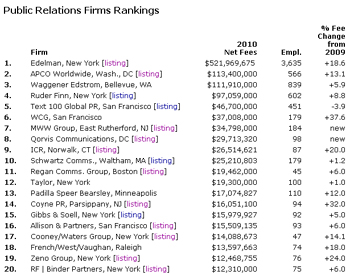 This is good news for PR and especially the independent counselors. They are performing much better than the economy as a whole.

Were calling on the PR Society of America, its related although independent Foundation, the Council of PR Firms, the Institute of PR, and the Arthur W. Page Society to publicize this good news on their websites.

They should put aside their competitive instincts and live up to the promise they made to get tax-free statusthat they would support their entire industries and not just their members.

They are not supposed to compete with what any private business could do. To do so would be unfair. Theyre supposed to be mother hens to their industries.

All five have soaring codes and statements of principles that support research in PR and say they work tirelessly for the good of the industry.

Heres a chance for them to put their money where their mouth is. All five send us a constant stream of their news such as surveys, elections, seminars, conferences, speeches, etc., and we use quite a bit of it.

PR is showing itself uniquely qualified to handle the blizzard of information and comment that is the web and social media.

ODwyers is the only publisher requiring tax and other documents to support PR firm fees and employee totals.

The 153 firms in the 2010 ranking include many that are members of the five groups named above and would benefit from publicity on the websites of the groups they support.

For instance, 11 of the 14 independent firms represented on the board of the Council: APCO; Waggener Edstrom; Coyne PR; RF Binder; Capstrat; Makovsky + Co; Airfoil; CJP Comms.; rbb PR; Powell Group, and Linhart PR. Forty-six of the 81 independent member firms of CPRF are in the rankings, as well.

Not in the rankings but represented on the board, are Weber Shandwick, Fleishman-Hillard, and Porter Novelli. Sarbanes-Oxley considerations block them from being in the rankings.

Three independent firms represented on the board opted not to take part in the rankings360 PR, Mitchell Comms. Group, and Xenophon.

Andy Polansky of Weber Shandwick is chair of the Council.

Firms are in the ODwyer rankings because the rankings bring them business.

Prospective clients can trust the numbers. Besides the overall rankings, this website provides rankings in twelve categories such as healthcare, tech, financial PR, etc.

Google searches under these headings bring up the ODwyer rankings at or near the top. No other publisher is doing rankings by such categories.

If the Council wants to help not only its members but non-members it will put the ODwyer rankings on its website and do an accompanying story.

The PR Society, dedicated as it is to advancing the profession and the professional, should feature this major good news about PR on Tactics online and in printed Tactics.

Many of the PR firms in the rankings have staff who are members of the Society.

The Foundation of the Society, a 501c/3 charity that supports research projects that impact the practice of PR and build greater awarenessabout the role of PR, should give the rankings prominence on its website and e-mail the entry to all its supporters. The Foundation describes itself as an independent organization although many of its 19 directors are leaders in PRSA.

The Arthur W. Page Society, also a 501c/3, headed by Julia Hood, former editor-in-chief of PR Week/U.S., should put the rankings on its website and e-mail them to its nearly 400 members.

One Page goal is to encourage research that contributes to the professions store of knowledge while another is to provide multiple opportunities for members to receive timely knowledge about PR.

This is an opportunity to increase knowledge of PR.

William Margaritis of FedEx is chair of Page.

A special duty to disseminate the ODwyer rankings and accompanying story, in which 13 executives of major firms give the reasons for the gains, rests with the Institute for PR.

Its website says it focuses on research that matters and the ODwyer ranking would certainly qualify as that. IPR asserts it brings educators and professionals together and also develops students. A unique strength of the Institute is its dedication to actively sharing all of its knowledge, says one sentence.

Since IPR is so dedicated to research and sharing it, we hope it will share the results of what is the biggest annual research project in PRthe canvassing of PR firms throughout the U.S. by the ODwyer Co., obtaining proofs of the size of PR firms so that prospective users can have reliable facts and figures about firms they may hire.

Over the years, says the IPR website, the Institute and its trustees have played a central role in elevating the entire field of PR and continue to sharpen the ways IPR fuels this rapidly evolving field.

If its interested in the entire field of PR, that must include us!


Co-chairs of IPR are Michael Fernandez of Cargill and Matthew Gonring of his own firm (formerly at Pactiv).

PR, like law, sports and many areas, has developed a number of well-defined, specialized practice areas.

The websites of the five groups dont recognize this new reality in PR but heres a chance for them to do that.

Ninety firms provided 2010 fee totals to the ODwyer rankings in healthcare, up from 80 for 2009. The firms publicly list their healthcare clients to back up these claims.

Eighty-five entered the tech/industrial category, up from 71 in 2009. Food/beverage rankings grew to 69 from 58.