In his outstanding book, "Life," Keith Richards credits good PR and the ability to manipulate the press as keys to the early success of the Rolling Stones.

The Stones guitarist calls the band's then-producer Andrew Oldham "the absolute PR man par excellence." Oldham joined the Stones after a fight with Brian Epstein, who managed the Beatles. The Stones were to be Oldhams revenge on Epstein. 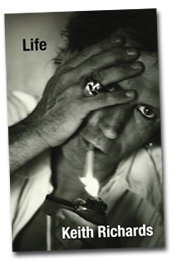 We were the dynamite, Andy Oldham the detonator, wrote Richards.

Oldhams plan was to position the Stones as Fab Four opposites, or as Richards put it, long-haired, dirty and rude. The groups houndstooth, dogtooth check jackets were dumped for leather jackets.

The Beatles are all over the place like a bag of fleas. And youve got another good band. The thing is not to try and regurgitate the Beatles. So were going to be the anti-Beatles, wrote Richards. The goal: Youve got the Beatles, mums love them, dads love them, but would you let your daughter marry this?

Rat-packer Dean Martin, who had his own variety show during the 1960s, famously introduced the band as these long-haired wonders from England, the Rolling Stones. Theyre backstage picking flees off each other.

Oldham decided the Stones could use the bastards on Fleet Street by giving them what they want:


The media were so easy to manipulate We were obnoxious. But these people were so complacent. They didnt know what hit them. It was blitzkrieg, really, an assault on the whole PR setup. And suddenly you realize theres this landscape out there, these people that need to be told what to do.

The Stones became masters of PR stunts. Oldham once called Fleet Street to say if you want to watch the Stones get thrown off the Grand Hotel, be there at such and such a time. That way Andrew could set them up, wed have them panting for nothing. And of course, it provoked things like 'Would you let your daughter marry one?'"

Richards said it was important to get the bands name in the dailies because space in the music press was very limited and there were few radio and TV outlets to pitch. Oldham, noted Richards, was smarter and sharper that the a------s who were running the media, or the people running the record companies, who were totally out of touch with what was happening. You could just run in and rob the whole bank. It was a bit 'Clockwork Orange.'

Though PR undoubtedly played an important part in the rise of the Stones, the group ultimately succeeded because it is the worlds greatest rock and roll band.