Can you spot the Tokyo Electric Power Company PR executive in this photo from Kyodo News? 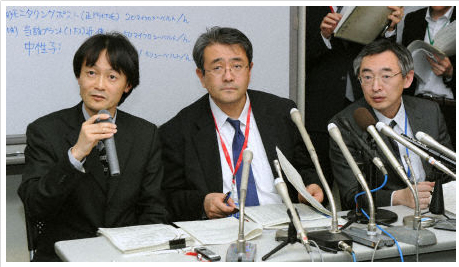 Yes, that's the company's PR chief, Kaoru Yoshida, in the center, the most sullen of the three executives trying to hold together a press conference about its troubled reactor on Monday.

Paul Argenti, a professor at the Tuck School of Business at Dartmouth, sees challenges and opportunities for Tepco, as the company is informally known. Argenti gave some suggestions for Tepco on the Arthur Page Society blog today, noting the chance for a company "notorious for its cover-ups during previous crises" has a chance at redemption.

Tepco is facing a difficult, if not impossible PR situation. But closer to home, the U.S. nuclear industry will likely feel some PR fallout, even though President Barack Obama insisted U.S. states and territories are not in harm's way from Japanese radiation,

Richard Levick, president of Levick Strategic Communications in D.C., said the timing could not have been worse for the U.S. nuke sector, as it was poised for growth with support from the Obama administration.

Levick writes on the firm's blog:


Already, nuclear industry advocates have been in the media arguing that the fear extending far beyond Japanese borders is overblown. While they may very well be correct, thats simply not enough.

They need to be leading an effort to educate the public as to why nuclear power is safe. What mechanisms are in place to protect against man-made and natural disasters? What fail-safes are in place should the worst-case scenario come to fruition? What are the industrys plans for finally addressing the issue of what to do with spent nuclear fuel  the material that now poses the greatest health risk to affected Japanese populations?