Teddy Kennedy must be spinning in his grave over news that operator of the Cape Wind project, the nations first offshore wind farm development, plans to run eco-tours to the 130 wind turbines that are slated off the coast of Cape Cod. 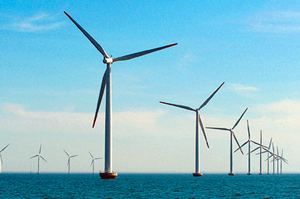 During his illustrious Senate career, Kennedy fought many good fights with healthcare being his crowning achievement. Kennedy wasnt around to see President Obama sign the healthcare bill, but he was hailed as the father of the reform measure.

The Kennedy family was on the wrong side of the fight over Cape Wind, fearing the wind mills would ruin the viewshed of its beloved compound in Hyannis Port. Nephew Robert Kennedy Jr. argued that hundreds of flashing airplane warning lights on the turbines would steal the stars and nighttime view.

The Feds dismissed the elitist argument, approving Cape Wind in 2010. Teddy's protege, John Kerry sealed the fate of Cape Wind by lining up financing for the construction.

The Hyannis Port viewshed is going to be a busy place. Cape Wind announced today that it is teaming with Hy-Line Cruises to run tours to the windmils. Apparently dodging the arms of the windmills, ferries will transport passengers to what is billed as a world class tourist attraction.

An onshore visitor center will tell of energy use on the Cape from historic windmills to whale oil to fossil fuels and the transition to clean energy. Cape Wind president Jim Gordon says the effort is a testament to the spirit, ingenuity and progressiveness of Cape Cod and Massachusetts and how our community harnessed the wind to protect the environment and revitalize the economy."

Like the Kennedy family, Hy-Line fought the project, worrying the windmills would hurt tourism on Marthas Vineyard and Nantucket. Hy-Line has run ferries to those islands for 50 years. Hy-Line now sees the light. The Kennedys should see that same light, which will be powered by wind in 2013 or so.