Look for AT&T to run a clinic on the cost-effectiveness of lobbying as it fights to fend off opposition to the $39B acquisition of T-Mobile. 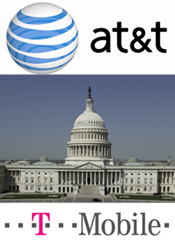 Completion of the merger will provide AT&T and runner-up Verizon duopoly control of the wireless market. The AT&T/T-Mobile combo would create a company three times the size of Sprint, the No. 3 wireless company, with more than 80 percent of the market.

Watchdogs, such as the Free Press, have panned AT&T/T-Mobiles hook-up as a move that will result in nothing more but higher prices and fewer prices. Derek Turner, research director of FP, believes transaction of the newly engorged AT&T and Verizon will exert even more control over the wireless Internet.

Ma Bell isn't sweating. She oversees a battalion of lobbyists on Capitol Hill who are going to be all over the Federal Communications Commission and Justice Dept, which cleared the Comcast/NBC Universal venture, requiring the tossing of a few bones to critics concerned about minority programming and access.

The Center for Responsive Politics reports that AT&T has spent $90M in lobbying outlays since 2005. Thats pocket change for the company, which chalked up $124B in 2010 revenues and cleared a cool $20B in net income.

The Republican-controlled Congress shapes up as another ace in AT&T's hand. The Center reports that key committee chaimen Darrell Issa (Oversight), Fred Upton (Energy and Commerce) and Lamar Smith (Judiciary) have hauled in more than $200K in donations from political action committees from AT&T. That is money that was well-spent.

Upton and Communications subcommittee chairman chief Greg Walden (R-Ore.) have already proved their worth. They issued a statement to say a proposed transaction of this scale also underscores the importance of the objective review process at the FCC. Duh! They want to determine whether the FCC is conducting thorough market analysis and how that influences the agencys decision-making. We believe such analysis is essential to this and other transactions, and we intend to determine how Congress should reform the FCCs process going forward.

In other words, the two anti-regulatory zealots are more intent on gutting the FCC than determining if AT&T/T-Mobile deal is going to squeeze customers. Thats the classic GOP "shock-therapy treatment," a strategy to use a blockbuster event (ATT/T-Mobile) to push a political agenda. The FCC, not AT&T, will be the centerpiece of any scrutiny by Upton and Walden.

AT&T chief Randall Stephenson is one lucky fellow. He has nothing to worry about in Washington, D.C.