Former Queens Congresswoman Geraldine Ferraro is rightly remembered for her trailblazing run as the first woman nominated by a major political party to run for the position of vice president of the U.S. Feisty Gerry probably thought she should have topped the ticket.

The gang at ODwyers remembers Ferraro for her PR work, which didnt get much press in the tens of thousands of words written about the 75-year-old politico who died March 26. 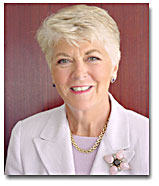 Gerry got her PR start in 1989 at Chicago-based GolinHarris, which was trying to become a player in the New York market. In the Big Apple, she did work for Mercy Housing, a non-profit affordable housing builder, and the Alliance for Energy and Economic Growth.

It was campaigning for the Alliance, a Big Business coalition spearheaded by the U.S. Chamber of Commerce pushing for a permanent nuclear waste dump at Nevadas Yucca Mountain, that got Ferraro notice in PR circles.

She was criticized for shilling for Yucca, especially in the aftermath of 9/11. Wrote an ODwyer reader:


The fact that she is now shilling for the Yucca Mountain waste dump saddens me deeply. How could anyone think that a stockpile of 77,000 tons of nuclear waste will not be a target? How could anyone believe that the trucks and railroad trains carrying the stuff through 45 states, past the homes, businesses, schools, houses of worship and playgrounds of millions of people will not be targets?

Ferraro exited GH in 2003 to join The Global Consulting Group, a unit of Britains Huntsworth. That move re-united Gerry with Richard Wolff, who had run GHs New York office. Ferraro had told ODwyers (link, sub req'd) that her split from GH was amicable, and that her beginning at GCG was quite interesting and quite gratifying.

Ferraro returned to D.C. in 2007 for a post at Blank Rome Government Relations. That put her back together with BR senior principal Peter Peyser, who was a key Ferraro aide on the House Committee on Public Works.

Blank Rome issued a statement March 26, remembering Ferraro as a great friend and wonderful partner. Her three-year stint at BR was marketed by numerous successes on behalf of our clients and by the inspiration and support she provided to many members of our Firm.

She certainly left her mark both in politics and PR.