For a guy responsible for the murder of 270 Americans on Pan Am Flight 103 over Lockerbie, Scotland, and the killing of U.S. servicemen in a German disco, Col. Gaddafi enjoys a surprising level of support in the U.S. They rip President Obama for trying to take him out.

One wonders how much of the criticism fired at Barack Obama for the U.S. intervention stems from pure hatred of the president. If Obama says "right," his critics relexively cry "left." Up is down. Black is white. 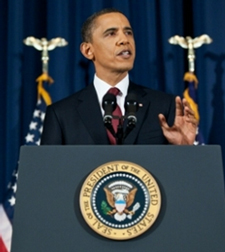 Obama only ordered the bombing to save the lives of people in the rebel stronghold of Benghazi, targeted by Gaddafi and son with house-by-house extermination. That's what America is supposed to do. If the president ignored those pleas for help, he would have been held responsible for the ensuing massacre.

Obama is attacked by the deficit-fixated Tea Partiers for spending millions to bomb the Libyan military, an amount thats a drop in the bucket compared to the billions wasted on Americas misadventure in Iraq.

Obama critics jumped all over yesterdays testimony from U.S. Admiral James Stavridis, NATOs Supreme Commander, who said there are flickers of potential Al Qaeda and Hezbollah influence among the ragtag rebels. Thats music to the ears of the anti-Obama crowd, who now warn that terrorists will seize any guns that the West supplies to fight Gaddafi to turn on us. It's Obama, supporter of terrorism.

Of course, there are little more than flickers of Al Qaeda fighters (about 100) in Afghanistan, but that's another matter.

Some hit Obama for ordering the bombing without knowing names of rebel leadership, as if those names really mattered to Gaddafi. Others knock the President for acting too late. If we had acted three weeks earlier with a no-fly zone, he would have been taken out, said Sen. John McCain. Note to Big John: What were the rebels going to take Gaddafi out with? Slingshots? Others squawk that Obama didnt consult Congress. Do you believe that esteemed institution would give the President even the time of day. Wasn't healthcare a walk in the park?

Its gotten to the point at which The Colonels helming of Libya is trumpeted as a model for Africa. In criticizing a column by David Brooks, a New York Times reader noted that Libyans enjoy the highest standard of living in Africa, with free healthcare, a low child-mortality rate, free housing, clean water, education, a superior literacy rate and a decent distribution of wealth.

If Gaddafi was so great, why did people rise up against him? The reader portrays Gaddafi as a heavy-handed, eccentric Bedouin bird, rather than a guy who has murdered his own people and funded global terror organizations.

The same group that once disparaged the French as cheese-eating surrender monkeys for opposing the Iraq invasion have now trained their sights on the U.S. president. Go figure. France has rallied around its leadership. We should play catch-up ball.

Whatever happened to the ideal of America as the shining light to the rest of the world? In lashing out at a tyrant hellbent on destroying his own people, the president upheld the country's moral standards.

Obama should be applauded by a proud American people.