Thinking I was reading the April Fools Day edition of the Wall Street Journal , I double-checked the date of the paper this morning. Nope, I had the April 4 paper. There were two eye-openers.

A full-page ad ran on A13 featuring an open letter from Richard Mellon Scaife, scourge of the left. 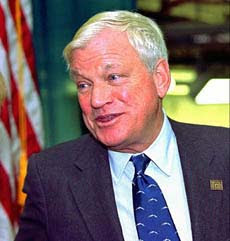 Assuming Scaife was blistering the Obama administration or tossing rose petals at Wisconsins union-busting Governor Scott Walker, I read on. Boy, was I wrong.

Scaifes letter is ringing support of Planned Parenthood, which is No. 1 on the de-funding list of the right-wingers who are hankering to outlaw abortion. Not only does Scaife admonish conservatives for going after Planned Parenthood, he is aggravated by the continuing attacks on [Margaret] Sanger and her primary legacy, the Planned Parenthood network that serves so many Americans today.

Scaifes grandmother was a friend and supporter of Sanger, one of Americas earlier, most effective advocates of birth control. The chief of the conservative Pittsburgh Tribune-Review and former tormentor-in-chief of President Bill Clinton says he met Sanger several times before she died in 1966 and was impressed by her intellect and her commitment to many issues, not the least of which was enabling every woman to be the absolute mistress of her own body.

Scaife points out that 90 percent of Planned Parenthoods work deals with preventative care, including preventing unintended pregnancies that often lead to unwanted, neglected and abused children. For many poor Americans and teen-agers, Planned Parenthood is the only reliable source of counseling to avoid getting pregnant in the first place.

Another head-scratcher that carried the headline Fox Targets Growing Latino Audiences ran in the media section on B4. I thought the WSJ was taking a cue from Sarah Palin, who funded campaign materials that regrettably targeted Democratic Congressional swing districts before the attempted assassination of Rep. Gabby Giffords of Tucson.

Fox News spreads fear from a bogus invasion of anchor babies and gives play to Republicans who are out to repeal the 14th Amendment that automatically grants U.S. citizenship to children born of illegal immigrants. Is this piece part of a new comic section in the revamped WSJ?

To his credit, News Corp chief Rupert Murdoch, is on the side of the angels (Angels) when it comes to legalizing the undocumented. Rupe, after all, is an immigrant from Down Under.