Its quite a strange situation when the Secretary of Defense shows more empathy for the average government wage-earner than the President of the U.S. 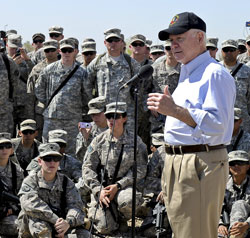 DODs American Forces Press Service reports that Secretary Robert Gates told soldiers at Baghdads Camp Liberty that he is well aware of the financial hardship young troops will suffer in the event of a government shutdown. In the event of a shutdown, soldiers eventually will be paid in full for their service.

There is a hitch this month. If federal D.C. closes, the scheduled mid-month check for soldiers will contain only pay for the first week of the April.

Gates told the troops that he understands that may mean tough times. I remember when I was your age, I did a lot of living from paycheck to paycheck, Gates said, and so I hope this thing doesnt happen, because I know itll be an inconvenience for a lot of troops.

The AFPS said Gates later told reporters that a lot of these young soldiers live pretty much paycheck to paycheck, and when I start to think about the inconvenience that its going to cause these kids and a lot of their families, even half a paycheck delayed can be a problem for them.

He also joked that throughout history governments always paid the guys with guns.

The front page New York Times April 7reported how President Obama has the chance to reset his national security team when Gates leaves his post during the summer.

Before Gates leaves for his home in Washington state, he should school our aloof president on the need to occasionally feel the pain of the average American who is getting the shaft from both Republicans and Democrats in D.C. Gates will be missed in more ways than one.