What does reality show host veteran Donald Trump have in common with Swedish furniture retailer Ikea?

Both consider the U.S. a third-world country. 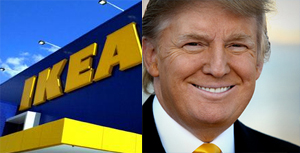 Broadening his campaign plank and moving from full "birther" mode, Trump attacked President Obama for the rising price of oil. The real estate heir said Obama is in bed with OPEC leaders. That opens another fabulous line of attack for the Trumpster: Obama as closet Muslim. On second thought, that has been used before but then again the birther charge is not exactly new.

David Plouffe, a key aide to Obama, has dismissed Trump as a "sideshow" with "zero" chance of becoming president. David is off his game. Trump is political gold.

The bombastic New Yorker has filled the entertainment void that emerged with the disappearance of Sarah Palin from sight. When last heard, Sarah was hitching her snowmobile to the Trump birther bandwagon. The Trump circus will soon be over. Hes promised to decide by June whether to run or not. Prediction: the Presidency is too limited for The Donald. He'll bow out just like Sarah did in Alaska. The dream ticket of Trump/Palin will have to wait.

On the Ikea front, the Los Angeles Times reported April 10 that workers in its Swedwood bookcase and table factory just outside Danville, Virginia, earn a fraction of what their Swedish counterparts do.

Danville workers start at $8 an-hour, while the Swedes collect the minimum wage of $19. A third of the Danville workers are temps that receive less pay and no benefits. The difference in wages, according to an Swedwood spokeswoman Ingrid Steen is due to the standard of living and general conditions in the different countries. Ouch!

More disrespect for America: Danville plant management has fought tooth and nail a plan to unionize the facility. That action violates Ikeas IWAY policy, which grants workers the right to join unions, according to the LAT. Steen admits to hearing rumors of mandatory anti-union meetings at Danville, but says those sessions would not be approved by management in Sweden. You can say that again!

Danville is located near the North Carolina border in tobacco country where the textile manufacturing base has been savaged. Ikea received $12M in state and local subsidies when it opened in 2008. The Virginia Employment Commission said the hourly media wage in the area is $15.48. Ikea enjoys a reputation as a hip corporate citizen. Danville shows its true corporate colors.

Ikea doesn't care a bit about workers at its American sweatshop as long as they continue to churn out the junk that is sold in its 300 stores, 35 of which are in the U.S.