The tone deaf PR gang at Tokyo Electric Power Co., now responsible for a disaster on par with the Chernobyl nuclear meltdown, is at it again.

The owner of the stricken Fukushima nuclear power plants that have radiated Japans country-side, jolted its economy and forced rolling blackouts of Tokyo have resorted to "masking tape" to protect its workforce from public outrage. [One O'Dwyer wag suggested that TEPCO probably used up all of its duct tape on the stricken reactors.] 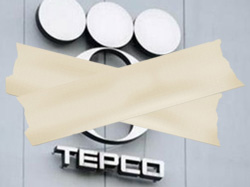 An April 3 report in Tokyo-On News Tablet says TEPCO officials taped over corporate signage of employee dormitories. Other TEPCO signs were just removed from the 23 dorms in Tokyo "to protect our employees and their families." The corporate edict to go undercover went out from headquarters on March 22.

What triggered the tape job? Anti-TEPCO graffiti was found on the dorm housing the companys crackerjack PR team that must have trained at Three Mile Island or Chernobyl before taking the Japanese gig.

The T-ONT reports that rocks have been tossed at TEPCOs headquarters and a torrid of complaints have overwhelmed its call centers. The Tokyo Metropolitan Police stands guard at the home of TEPCO chairman Tsunehisa Katsumata.

We were told this wasnt supposed to happen in the collective paradise of Japan. In the aftermath of last months massive earthquake, terrible tsunami and horrible meltdown, the U.S. media marveled at the stoic nature of the Japanese people. The March 11 PBS NewsHour reported that life in Japan is "particularly orderly." After all, Japan rebounded smartly from the U.S. atomic bombs dropped on Hiroshima and Nagasaki. The country also rebuilt after the massive earthquake that rocked Kobe in 1995, killing more than 6,400.

Coping with disasters was said to be in the DNA of Japan.

Preachy U.S. media imagined the rioting and looting that would have rocked America, if this country was exposed to Japans current horrors. They held post-Katrina New Orleans as an example of America running amok. There was no mention of New York Citys magnificent "we are in it all together response" to the World Trade Center attacks. That would have played against the media narrative.

A handful of media reports about Japans massive police presence set the record straight about the so-called cohesive society.Slates Christopher Beam had a good one March 16. He reported that structural factors in Japan better explain the absence of looting. Those factors include a robust system of laws that reinforce honesty, such as the measure that could get a person ten years jail time for not returning a found wallet. A strong police and organized crime presence also keep people in check. The three major Japanese crime groups maintain patrols to maintain their turf.

One group shipped 40 tons of humanitarian assistance to quake victims.

There is plenty of outrage in Japan. It is just being expressed the Japanese way. Any human would seethe at TEPCOs incompetence.

The energy company needs more than tape to deal with public anger. If TEPCO evades takeover, break-up or nationalization, hiring a world-class crisis PR firm would be the first step on its very long road to redemption.