Tim Cost, a career IR exec (chair of National Investor Relations Institute 1998-99), is the new head of PR at PepsiCo, reporting to CEO Indra Nooyi and replacing Julie Hamp in that role.

Other changes include the departure of one SVP in PR and two VPs plus a raft of inter-company PR shifts.

Pepsi has a big PR problem and a big enemy  First Lady Michelle Obama, who is fighting obesity.

Americans drink an average of 50 gallons a year of pop laden with sugar and salt and no nutrition whatever that only makes them thirstier, say nutritionists. It?s also bad for teeth.

Societies with low sugar consumption have a much lower rate of such diseases, says the article.

Sugared drinks are the No. 1 source of calories in the American diet and a prime cause of obesity in children who lead less active lives these days. Consumption has soared from 40 pounds to more than 90 pounds per person per year, says the U.S. Dept. of Agriculture, and this has tracked with a rise in obesity and diabetes.

Pepsi PR's job is to block legislation and minimize this issue. 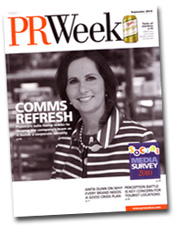 A cover story on Hamp in PR Week/U.S. last September started with Pepsi's deeds in 2010: reducing sodium, fat, and sugar in its products; providing grants for socially responsible programs ("Pepsi Refresh"), and advertising the program in Super Bowl ads instead of product.

Left out was Pepsi's biggest deed: helping to block a penny-per-ounce tax on soda sought by then New York Governor David Paterson.

Similar laws are being pushed in 12 other states to go with such taxes in Arkansas, Tennessee, Virginia, Washington, West Virginia and Chicago.

Passage of a soda tax in New York, which often leads the nation in progressive legislation, would have opened the floodgates throughout the U.S. and gone a long way to making soda "the new cigarets."

Health warnings and high cost ($11 for many brands in New York), have cut smoking in half in recent years.

The soda industry popped its cork when the tax was proposed, forcing Paterson to take it out of the budget. It never got to the floor of the legislature.

President Obama was only a half-hearted proponent of a soda tax.

He told Men's Health magazine that such a tax is "an idea that we should be exploring. There's no doubt that our kids drink way to much soda."

A 12-ounce can of soda has 150 calories. Pepsi has stopped selling sugared drinks at schools but youths have plenty of other places to buy them. Diabetes in children is on the rise.

The arguments against a soda tax were some of the same arguments used by the tobacco industry in defense of smoking.

Moderate use is fine and why pick on us? says the soda industry. Owners of small grocery stores said a decrease in high profit soda sales would drive them out of business.

Derek Yach, SVP of global health at Pepsi, said that if people cut down on soda, they might eat other bad foods and get "higher levels of fat."

This line of reasoning perplexed us. It?s like saying don?t punish children who skip school because they might do something worse.

We wanted to discuss the fat issue with Peter Land, now heading press relations at Pepsi, but he directed us to the American Beverage Assn.

We also wanted to discuss the stock of Pepsi which at $65 is lower than the $77 price three years ago.

Pepsi has $24.9 billion in debt and minus $7.19B in tangible assets (vs. net tangible assets of $4B at arch rival Coke). Its debt exceeds its assets (ratio of 1.11). The debt was run up buying numerous brands like Frito-Lay and Quaker and building revenues from $1B in 1970 to $57B currently.

Financial was declared "out of bounds" by Land.

We asked for an interview with Nooyi (pronounced "newi") but that was called out of the question.

We started to tell him that the Society last year for the first time banned any audiotaping or picture taking by reporters at the Assembly (even before it started).

While letting this reporter cover the Assembly, the Society then "de-accredited" me for the conference and demanded I pay $1,275 if I wanted to attend sessions. A total of $3,825 was demanded from three O?Dwyer staffers who were to cover the conference while reporters for PR News and PR Newser went free. No logical reason was given.

Adding insult to injury, a delegate threatened to beat me "to a pulp" and 20 delegates barged into the middle of my interview with delegate Art Stevens to present pens signifying that I had lost my mind.

Land did not want to hear about that, either.

Another unwelcome tale was about PR Week/U.S.

PRW competed against us by giving away about 30,000 copies of its $249 Contact directory over a five-year period to boost subscription sales (total of about $7.5M in directories).

How would Pepsi like it if Coke gave away its product free for five years? It might cut into Pepsi sales.

What PRW did was a violation of the USPS code which forbids premiums worth more than 70% of the cover price of a publication (PRW's price ranged from $145-$195). USPS agreed with us. PRW responded by removing the price from Contact but keeping it as part of a subscription package.

Pepsi's PR is exactly like that of the PR Society  refusal to discuss embarrassing topics.

Framing, spinning, agenda-setting and misdirection are tools currently in use in some PR quarters.

The Society does this each fall when it occupies the Assembly with all sorts of tasks that take time away from discussion. When discussion is allowed, leaders pick the topic. Sometimes delegates are told to hold questions until the "town meeting" at the end of the Assembly but then there is no time for that.

This approach emanates from super-secret PR Seminar (mostly blue chip corporate PR execs) and its offshoot, the Arthur W. Page Society. An executive who described corporate PR's "Gulag of Silence" is none other than Tim Cost, who now heads PR at Pepsi.

The Pepsi release on him, by the way, did not mention that Cost was a former chair of NIRI. He?s being re-cast as a generalist.

Cost, a panelist at the 1997 NIRI conference at Indian Wells, Calif., which this reporter attended, said he was struck by the widespread retreat of PR people from press relations.

He felt a "business decision" had been made by many companies to limit press/PR interaction.

Reporters were getting so little from PR anymore that they were now besieging IR people, he said.

Taking note of the same retreat April 9 was Peter Bart of Variety in a column headlined, "For Publicists, Evasion Overrules Promotion."

Publicists, "once a colorful fraternity," now seem to be "locked in their bunkers doing damage control," he wrote. He said he misses the "old days" when stars and their publicists were far more available.

Symptomatic of PR's seclusion is the Pepsi website. No names of PR pros are available although the corporate staff numbers 100 and there are many more PR pros working in the company's 19 brands.

Reporters can put a question in a box and hope someone will respond. Many other blue chips have the same policy.

The explosion of information on the web appears to be pushing some parts of PR into further seclusion.

Hamp is a member of PR Seminar, which will meet June 5-8 (Sunday-Wednesday) at the Ritz-Carlton in South Beach, Miami.

Also a member of this four-day, off-the-record gathering is Kathleen Matthews, XVP Global communications and PA of Marriott International and wife of Chris Matthews of MSNBC's "Hardball."

Kathleen Matthews is an honored journalist who worked in D.C. for 25 years including as evening news anchor for the ABC affiliate.

No news organization except O'Dwyer's has ever mentioned the existence of PR Seminar, although more than 25 major media have attended it including editors from the New York Times, Wall Street Journal, Fortune, Financial Times, National Public Radio, ProPublica, etc.

An ethics committee member of the Society of Professional Journalists said this relationship (link, sub req'd) of Big PR and Big Press breaks at least ten articles of the SPJ Code.

Will this be the year that Chris Matthews, whose motto is, "Tell me something I don?t know," breaks this journalistic logjam!?

Another coincidence is that the PR Society conference this year is at the JW Marriott Orlando Grande Lakes hotel Oct. 15-18.

We're wondering how much work we have to do to get hearing assistance in covering the Assembly and conference. Maybe Kathleen Matthews will help us. This assistance was improperly denied to us in 2009.

Arthur Yann, VP-PR of PRSA, says we will have to wait until August to find out whether we are "credentialed" for either one.

He can deny credentialing for any or no reason since credentialing is on a "case-by-case" basis, says the Society's media policy.