As the Pentagon is poised to celebrate the ten-year anniversary of the Afghanistan conflict, the last thing it needs is speculation that its playbook to win the hearts of minds of the locals is as phony as a three-dollar bill. 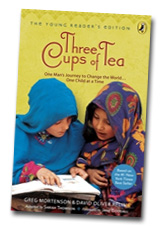 The 60 Minutes report that Greg Mortensons Three Cups of Tea is partly fabricated must be unsettling to the Defense Dept. brass. The author, who claims that his charity built schools for kids in Pakistan and Afghanistan, admits that part of the narrative may be based on a compressed version of facts.

In other words, a more apt name for the book is either two cups or even a cup of tea.

Mortenson claims the CBS slam is an example of Big Media doing a sensational hit job on Mortensons Montana-based Central Asia Institute. He told the Bozeman-based Chronicle that what CBS did could be devastating for tens of thousands of girls, for the sake of Nielsen ratings and Emmys. Viking, publisher of Three Cups, today announced it would review the books contents with Mortenson.

The Pentagon is kind of sticking with its guy, who established strong ties with Admiral Mike Mullen, chair of the Joint Chiefs of Staff.

A Pentagon spokesperson told the New York Times that DOD continues to believe in the logic of what Greg is trying to accomplish in Afghanistan and Pakistan because we know the powerful effects that education can have on the eroding the root causes of extremism.

Its important to note that the Pentagon rep didnt say that he is confident that Mortensons charity actually put up those buildings.

The DOD should make lemonade out of this PR lemon. Go on the offensive and say that due to the controversy over the book of its favorite author, the Pentagon is packing it in. Accelerate the Afghanistan withdrawal schedule that is envisioned by President Obama.

If that advice is taken, Mortenson did his country a great service.