The Catholic League for Religious and Civil Rights took the PR bait this week and fired off a steady stream of criticism at recording artist Lady Gaga for her "accidentally leaked" single "Judas." 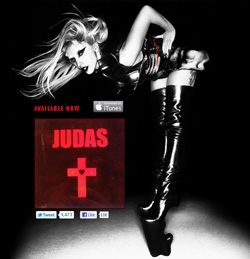 The song, in which she sings that she's "still in love with Judas," has been roundly criticized by the 230,000-plus-member Catholic League, all but ensuring its debut at the top of the iTunes charts during Holy Week.

League president Bill Donohue took the group's outrage a step further in channeling his inner music critic in assessing Lady Gaga's talent, as well as the religious connotations. He told RTT News: "I find GaGa to be increasingly irrelevant. She thinks she is going to be groundbreaking. She is trying to ripoff Christian idolatry to shore up her talentless, mundane and boring performances. Another ex-Catholic whose head is turned around."

Gaga has proved to be a PR master in her meteoric rise over the past few years, getting help early on from tech agency ThinkTank Digital.