Hefty CEO compensation is a hot button issue during current proxy season, especially in light of the robust (yet jobless) corporate rebound from the Great Recession and Republican efforts to shower tax benefits on the wealthy while simultaneously cracking down on public worker unions in traditional liberal states such as New Jersey, Wisconsin and Michigan. 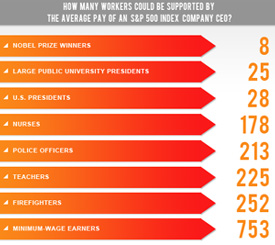 In noting that the Federal Reserve has U.S. companies sitting on a $1.9T mountain of cash and using hardly any of it to create jobs, the AFL-CIO charges CEOs with hoarding cash to fund their rich paydays.

Those companies will soon face the PR music as provisions of the Dodd-Frank Wall Street Reform and Consumer Protection Act provide new disclosure measures such as the ratio of CEO-to-worker pay.

Of course, the disclosure requirments must survive a savage attack by Wall Street lobbyists to gut them.

In a savvy PR move, AFL-CIO boss Richard Trumka released an interesting set of ratios comparing the number of workers that could be supported by the average $11.4M CEO pay. The CEO sum is enough to support 252 firefighters, 225 teachers, 213 police officers, 178 nurses and 28 U.S. Presidents.

That puts a human face on the chasm that separates the have-too-much crowd from the have-a-little bunch that is todays America.