Newsweek editor-in-chief Tina Brown is so, so very edgy, which probably explains the use of "freakin'" on the cover of the April 25 issue. 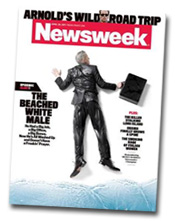 The indispensable Urban Dictionary defines freakin as a replacement for f----ng when used before a large audience. Does Newsweek has enough readers to justify that use? It's safe to say the old fogies at the Washington Post Co., former owner of the still No. 2 weekly, would never splash freakin' on Newsweeks cover.

Urban Dictionary has other definitions of freakin', including an unusual gyration carried out at dance clubs in the north of England (Think rave), having sex in a circular motion (Go figure) and a "word used by cowards who are too scared to say f-----g" (Sounds a bit harsh).

The Newsweek freakin' in question is part of a subhead for a story about the grim economic prospects of unemployed middle aged men, or has Tina calls a member of that hard-pressed group: "The Beached White Male."

Lets go to Newsweeks cover. "He had a Big Job, a Big Office, a Big Bonus. Now He's All Washed Up and Doesnt Have a Freakin' Prayer."

That description is sadly apt for many Newsweek staffers who were let go, both before and after arrival of the Chief Daily Beaster. Tina, an employee of IAC/Interactive boss Barry Diller, made her grand entry at Newsweek late last year after a courtship with the just departed Sidney Harman.

In the current Newsweek, Brown gives the inside skinny about how she was "charmed" by 91-year-old Harman. This weeks My Turn column was penned by Harman and deals with his determination to beat cancer.

Back to another teaser on the cover: "Obama Finally Grows a Spine" heralds a piece about the president manning up against Privatize (Rep.) Ryans assault on Medicare. The spine reference is tricky. Obama has grown and lost more spines during his administration than any president that I can remember.