Does President Obama have what it takes to stand up to our generals?

A powerful piece in the May edition of Harper's says it's time for Obama to re-assert traditional White House control over the military. Jonathan Stevenson, Professor of Strategic Studies at the U.S. War College, penned the "Owned by the Army" article. 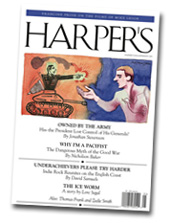 The best way for Obama to exert control is to stick to the July timetable to begin the withdrawal of U.S. forces from Afghanistan. The current campaign to support the corrupt Karzai Government has scant public support and costs taxpayers a whopping $10B a month.

By injecting their views into the affairs of state, Stevenson believes U.S. commanders are overstepping their constitution bounds. Though the media-savvy General David Petraeus hasnt gone to the extent of defying presidential authority as previous commanders George McClellan and Douglas MacArthur did, he talks of delaying the July withdrawal and of fragile and reversible security gains in Afghanistan.

Stevenson doesnt suggest a tanks-at-the-White House military takeover, but sees a '''coup desprit,' in which civilian leadership voluntarily submits to military thinking. That poses a considerable risk to the country because soldiers essential expertise is not in grand strategy but in the operational art of warfare. For instance, generals will conduct counterinsurgency in Afghanistan because they can, not because it is necessarily in the best interests of this country.

Obamas political tormentors fashion themselves as big fans of the U.S. Constitution. That founding document declared the President the Commander-in-Chief to safeguard against the rise of an American Julius Caesar.

The presidents military authority is limited only by Congress, not the officer corps. Tea Partiers should raise a toast in support of the Commander-in-Chief.

House Speaker John Boehner, after meeting with Petraeus on April 19, wants more information from Obama about the pace and scope of the withdrawal process.

The president is on the record as promising a significant and not a token gesture of troop withdrawal. He should study how Presidents Lincoln and Truman dealt with their respective military opponents. They showed guts and fired McClellan and MacArthur.

Obama needs the same guts to stick with his plan and get the U.S. out of Afghanistan as soon-as-possible.