Nutritionists, alarmed that one-third of Americans are overweight, are especially targeting "sports drinks" such as Pepsi's "G" series of Gatorade and Coke's Powerade, saying they are not only fattening but possibly dangerous and certainly expensive. 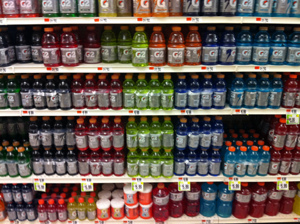 The recently introduced "G" series of Gatorade products, while about half as sweet as regular Gatorade, contains three teaspoons of sugar per 20-ounce bottle, the standard size.

Traditional Gatorade had 8.75 teaspoons per 20 ounces plus 270 mg. of salt and came under heavy attack of nutritionists.

This reporter visited two supermarkets over the weekend and could find no "regular" Gatorade at all.

Mary Cade, widow of the Dr. Robert Cade, lead inventor of Gatorade in 1965, said he would have been upset by the minimizing of the Gatorade name in the new packaging. A big "G" dominates packaging and "Gatorade" is in small grey type and perpendicular.


Nutritionists say consumers should not be fooled by content labels on "G" and similar products that provide calorie counts in terms of "8-ounce" servings.

Thirsty youths and athletes are not going to drink less than half a bottle of "G" or some other drink, especially when guzzling it is helped by the "wide-mouth bottles," they say.

Another beef, from a communications standpoint, is that the label on a "G" product is hard to read -- tiny grey type against a slightly less grey background. It should be white against grey just like the "G" is shown.

The standard Coke size many years ago was six ounces. Now if you order Coke in a fast-food place or restaurant you get something close to a quart.

The Pepsi jingle for many years said: "Pepsi-Cola hits the spot/12 full ounces that's a lot/twice as much (as Coke) for a nickel too/Pepsi-Cola is the drink for you."

Standard Gatorade was only supposed to be taken after lengthy vigorous exercise (1.5 to 3 hours) when you have sweated a lot and need to replace liquids, salt and glucose. Never drink a sports drink if you have not exercised, nutritionists say.

For a quick recovery of body chemistry after a workout, drink water and eat a healthy meal as soon as possible, they say.


Delish Was Tough on Coke

The website delish.com was tough on one of the new Coke products -- Odwalla. Eric Burkett wrote March 19, 2010 that Odwall's Blueberry B has lots of vitamins: "a 16-ounce bottle provides 720% of recommended daily allowance of B6 and several other vitamins -- but they're superfluous, at best. Your body simply passes the excess through. All the juices and purees are sugar  the bottle contains almost 12 teaspoons of sugar."

The blockage of information and communications is common with Pepsi and its products.

Reporters with questions about G products find that no PR pros are listed on the site and are instructed to fill out a form with at least ten blanks as though they were making a credit card purchase.

"Sports" and "energy drinks" are estimated to have about $10 billion in sales this year.

The sodas and snacks sold by Pepsi appear to be immensely profitable not only to the company but to the retail outlets that market them.
Pepsi says the retail value of its products was more than $130 billion in 2010. Since its revenues were $57B, this indicates that stores are marking up the Pepsi products 100% or more.

A chief reason that a penny-per-ounce tax on sodas was blocked in New York state last year was that thousands of small grocery stores said they would be put out of business if sales of soda declined.

The sports drink formula was created at the Univ. of Florida in 1965 when the "Gator" football coaches noticed that the sweat-drenched players, after hours in the sun, practicing often in full uniform, were both hungry and thirsty.

Dr. Cade and other UF officials decided a quick fix of carbohydrates (sugar) and "electrolytes" (salt and potassium) mixed with lots of water would help to replace lost nutrients.

Stokley-Van Camp gussied up this simple formula and embarked on a marketing/ad blitz that made Gatorade especially appealing to athletes and the youngsters who admired them.

UF and the inventors of Gatorade sued Stokley over the division of the profits and the Gatorade trust was created in 1973. UF has received $12 million a year in royalties totaling more than $150M.

Former California Gov. Arnold Schwarzenegger (an iconic body-builder) wanted to ban sports drinks from schools throughout the state and won initial approval from the State Senate.

Nutritionists disapprove of any fruit drinks, saying eating an orange, pear, apple, etc., is the only route to go.

Opposing the ban, according to Public School Review, are Pepsi, Coke and the other soda companies.

Schwarzenegger, appearing at a press conference with former President Bill Clinton Feb. 24, 2010, said one-third of California teens and three of five adults are either obese or overweight.

Clinton, who had heart surgery in 2004, said he has been both a "victim" and "complicit" in the problem because he supported subsidies for the corn industry.

This helped to make high-fructose corn syrup cheaper, resulting in it being used extensively in sweetened drinks, he said.

The Univ. of Calif./Berkeley's Center for Weight and Health says students who drink one sports drink a day for a full year may gain as much as 13 pounds.

While Pepsi PR has been putting forth an image of the company as a good citizen, its lobbyists have been working behind the scenes against taxes and other restrictions on sugar consumption.

The renewed assault on sugar may be behind the PR shakeup at Pepsi.

Nearly half of Pepsi's $57 billion in sales come from sweetened drinks (Pepsi, Mountain Dew, Gatorade, and international sales of 7Up).

PR head Julie Hamp, who had been at General Motors 25 years before joining Pepsi in 2008, heading GM PR in Europe in recent years, lost her direct report to CEO Indra Nooyi (pronounced "newi").

Replacing her is Tim Cost, who has mostly been in investor relations (chair of NIRI 1998-99). Pepsi's stock is below where it was three years ago.

Sinopoli was a part-time employee the past three years but had worked for Pepsi and its Quaker acquisition 21 years, rising to VP-corporate affairs for Quaker Tropicana Gatorade. She reported to Hamp. Peter Land, chief marketing officer at The Breeders' Cup (horses) from 2007-09, is now the chief press contact at Pepsi, replacing David Dececco. He was with Edelman from 1998-07 as global mng. director and was director of marketing comms. at the NBA from 1993-98.

The Pepsi website lists no PR people. Boxes are provided where reporters may submit questions.

Another PR headache comes from critics who say the artificial "caramel coloring" used by Pepsi, Coke and other foods contains two cancer-causing chemicals and should be banned.

The "artificial" caramel in colas is made by "reacting sugars with ammonia and sulfites under high pressure and temperatures" resulting in the formation of methylimidazole and 4 methylimidazole (4-MI), said the Center for Science in the Public Interest on Feb. 16, 2011.

Such products, according to "government-conducted studies," caused lung, liver or thyroid cancer or leukemia in laboratory mice or rats.

Under Calif. Proposition 65, foods containing more than 16 micrograms of 4-MI per person per day would have to contain warning labels.

Cola brands have about 200 micrograms of 4-MI per 20-oz bottle, says CSPI, and teenagers sometimes consume more than that each day.

The Food & Drug Administration is being urged to prohibit such chemicals in food.

A Q&A on the use of artificial colorings in various Gatorade products says the coloring helps to distinguish one Gatorade from another.

Don't the labels already do that, we ask?!

Since this writer has played a lot of golf and bridge, we have run into numerous overweight golf and bridge players and the common conversation is about new hip and new knee operations.

Almost all of our overweight golf and bridge friends have undergone knee or hip replacements. Some hobble around rather than get new knees, the more painful of the two operations.

"Get both knees done at once," a golfer advised a table of friends, "because it's so painful you won't go back after the first knee." His new hip was not nearly as painful.