Media hound Donald Trump says he is honored that he played a huge role in getting President Obama to release his birth certificate. 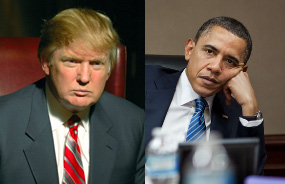 Im very proud of myself because Ive accomplished something nobody else has been able to accomplish, the billionaire windbag said today in New Hampshire. Take a bow, Donald, and then get lost.

Its the president who deserves a lot of credit. In finally releasing the long-form birth certificate, the president has demolished the single issue that was the cornerstone of Trumps campaign. Hopefully, Trump will come to his senses, declare Mission Accomplished and return to firing people on the Celebrity Apprentice.

His NBC reality show received a nice ratings boost from Donalds campaign. Its April 24 ratings were up more than five percent from the previous week, which was in line with the pick-up of Trumps birther nonsense. The Sunday show tied with ABCs Desperate Housewives as the top-rated program among viewers 18 to 49.

Watch Celebrity Apprentices ratings return to Earth once the Trumpster withdraws from the Presidential race.

The Trump carnival was totally birther-based. What does he do now? Investigate Obamas academic past? You got it.

Those are words from a guy who knows he's firing political blanks.

Until The Donald became Birther No. 1, he was a political pygmy. A flip-flopper on gay rights/abortion and someone who gave more money to Democrats than Republicans doesn't sound like GOP presidential material. And the media hasnt even gotten around to digging a little into Donalds personal past. Imagine the skeletons lurking.

Does the billionaire want to do hard-core retail politics in oases such as Arkansas, Mississippi, Idaho and Texas for the next 19 months of his life? Germophobe Trump did tell the Des Moines Register that he will shake hands with people, if he decides to run.

The nation owes a deep depth of gratitude to the president. His tone-deaf to PR team of crackerjack advisors waited way too long before counseling Obama to produce the goods. They are the ones who provided oxygen to Trumps PR road show and a ratings boost for his sad TV show.