Shasta Beverages, Ft. Lauderdale, which markets drinks like Tiki Punch and Shasta Cola, says it is closely watching proposed taxes on juices and other soft drinks and it believes in educating and providing consumers with a variety of beverages and allowing them to make the best choice based upon their circumstances and desires. 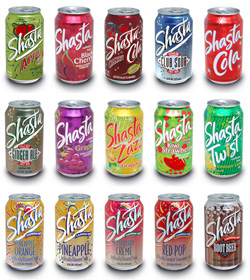 The Shasta statement, by its marketing department, came after this websites blog yesterday on Tiki Punch, which has 13.3 teaspoons of sugar in its 16-ounce container.

Shasta said it is concerned that taxing grocery items adds an unnecessary burden to American families.


Shasta has led the way in providing variety. In addition to offering more than 50 refreshing flavors, we were the first to convert our entire line of diet soft drinks to Splenda.

Healthy lifestyles, including a balanced diet and exercise, are very important to us and we trust an educated consumer to make the right choice.

The G line of sports drinks of PepsiCo has regular as well as low-calorie versions of the drink.

A midtown New York supermarket has a seven-foot wide, four-shelf display of hundreds of G products which are in the fruit juice/foods section of the store rather than with soft drinks.

About three-quarters of the G products on sale have 8.25 teaspoons of sugar per 20 ounces and the rest are labeled Low-Calorie and have three teaspoons per 20 ounces.


UF Talks to PepsiCo on Re-Naming

The University of Florida said today that UF lawyers are in talks with PepsiCo about the renaming of Gatorade as G products.

The name Gatorade is still on the bottle but its sideways, in grey print, and in much smaller letters than the G.

Mary Cade, widow of Dr. Robert Cade, the lead inventor of Gatorade (for the Gators football team of UF), said her husband would have been upset by the renaming of the drink.

PepsiCo has said that the renaming will not affect the flow of royalties to UF which total about $12 million yearly.

G is the fourth biggest product line at Pepsi with about $7 billion in sales at the retail level, according to the 2010 annual report.

Biggest seller is regular Pepsi (nine teaspoons of sugar per 12 ounces) with $21B in retail sales followed by about $8B for Mountain Dew (11.3 teaspoons in 12-ounce container), http://www.odwyerpr.com/blog/index.php?/archives/2440-BevReview-Tastes-Shasta-Punch.html
and Lays Potato Chips (about $7.5B).