"What are you wearing?" is the standard red-carpet PR inquiry, but when an event takes on the scope of, say, a royal wedding, the question becomes amplified on a daunting scale.

So who had the task of guiding PR for the nuptial wardrobes of Prince William and Catherine Middleton? 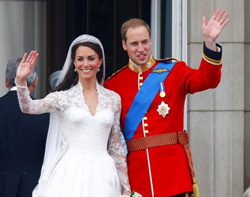 Meet Louise Thomas, the U.K. PR pro who set up her agency three weeks ago. EDP24, a newspaper for eastern England, reports that Thomas was hired by Kashket and Partners, a 456-year-old uniform maker that outfitted Lord Nelson and the armies of Gettysburg. K&P made the uniform worn by Prince William today and Thomas has spent a busy week lining up press for chairman Russell Kashket.

The need for discretion prevented us from telling our story before the wedding day," the PR pro told EDP24. "The news broke formally at 0001 hours Friday and I had just two hours sleep, among dealing with inquiries from media worldwide.

Of course, the more scrutinized of the couple has been Middleton, who this morning put to rest and endless guessing game about which designer made her wedding dress. That reveal also allows the PR team behind the fashion label to stop denying the story, which they've done for months now.

The newly minted Duchess of Cambridge tapped Alexander McQueen creative director Sarah Burton, a star designer before today but whose life will likely never be the same, to make her dress, as well as the dress of her sister, Pippa.

That revelation came from a palace press release early this morning as the procession got underway:

"Miss Middleton wished for her dress to combine tradition and modernity with the artistic vision that characterises Alexander McQueens work.

"Miss Middleton worked closely with Sarah Burton in formulating the design of her dress."

Alexander McQueen, which counts Lady Gaga among its high-profile fans, is part of Gucci, which is owned by French conglomerate PPR. We're thinking the corporate communications operation, especially PR heads Myriam Coudoux and Hongyi Huang, is working overtime today. By the way, here's Coudoux and others at AM denying the story back in March to CNN:


"This is not true," spokeswoman Myriam Coudoux said when CNN asked if McQueen creative director Sarah Burton was designing the dress. Hongyi Huang, the head of press for McQ, the house's contemporary clothing line, also denied the report. Burton and McQueen chief executive Jonathan Akeroyd denied the story as well."