ProPublica, the investigative news group headed by Paul Steiger, ME of the Wall Street Journal from 1991-2007, has published a 4,733-word examination of the relationship between the press and PR and concludes that the latter is eating the lunch of the former.

PR Industry Fills Vacuum Left by Shrinking Newsrooms, says the May 2 article by John Sullivan, who has written many articles for the New York Times.

The article, which had attracted nearly 30 comments on the ProPublica website as of press time, touches familiar bases such as media shrinkage, use of front groups, use of social media to bypass the press, and scanty IRS rules that allow front group donors to withhold their identities.

Left out, however, are the places where a lot these PR practices are cooked up  PR Seminar and its offshoot, the Arthur W. Page Society. 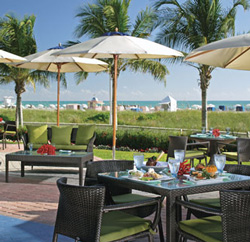 Super-secret PRS will meet June 6-8 at the Ritz-Carlton, South Beach.

Total cost for the 150 or so blue chip PR execs and their spouses/companions, including travel and the $3,500 registration fee, will be close to $1 million.

If leaders of the group have any say about it, including Marriott's Kathleen Matthews, wife of Hardballs Chris Matthews, not a word will escape  not even the program and especially not the list of attendees.

ProPublica itself could write about PRS but has chosen not to do so thus far. Amanda Michel, head of its citizen journalism unit, addressed PRS last year.

No media except O'Dwyer's has ever mentioned the existence of this influential group, although at least 25 major media have been represented at it including the NYT, Wall Street Journal, Bloomberg (including Michael Bloomberg himself), Time, Newsweek, Forbes, Fortune, Washington Post, Financial Times, Economist and cable and network TV news shows.

PRS, for the first time in its 60 years, is meeting from Monday to Wednesday.

This may be an economy attempt as it's scheduling the meeting after June 1, when rates go down. For many years PRS met in mid-May. Its 1996 meeting at the Ritz-Carlton at Amelia Island, Fla., was held from May 15-18.

Corporate executives who meet at plush resorts have attracted criticisms to their companies in recent years, which is one reason for the economy kick at PRS is on. AIG executives who did so while the company was being rescued by the government caused much criticism in 2008.


Many Page Members in PRS

About two-thirds of the 30-member executive committee of PRS are members of the Page Society.

Page, whose main principle is Tell the truth, is a 501/c/3 organization, a category usually reserved for charities, such as the Red Cross and United Way. Such organizations allow anyone to join and provide no benefits to donors.

Page, founded in 1983, is limited to PR execs at companies with more than $2 billion in revenues. Members, who pay $1,395 in yearly dues, receive numerous benefits, including research papers and admittance to seminars and meetings addressed by leading corporate and government figures.
Julia Hood, former editor-in-chief of PR Week/U.S. joined Page last August as paid president/COO.

Sullivan writes for ProPublica that the current ratio of PR people to reporters is about three-to-one and that the former are better equipped, better financed.

Wendell Potter, former PR executive at Cigna and author of "Deadly Spin," said in that book that journalists numbered 50,690 and PR specialists 240,610 in 2008 according to the U.S. Bureau of Labor statistics.

Newspaper ad revenues fell from the all time high of $49 billion to $22B by 2009, the article notes.

Gary McCormick, 2010 chair of PRSA, is quoted as saying that there have been abuses but most PR people try to stay clear of falsehood.

[A mystery is why McCormick and not 2011 chair Rosanna Fiske is the one being quoted. The Society has refused to reveal the speaking schedule of Fiske, an assistant PR professor at Florida International University.]

Leonard Downie, former executive editor of the Washington Post, said the web has made it easy for PR people to reach prospects directly and bypass the press.

Sullivan comments that without the filter of the press, it is hard to divide facts from slant.

Drew Armstrong, healthcare reporter for Bloomberg, said he worked hard and long to find out that the U.S. Chamber of Commerce donated $86.2M to the fight against the Obama healthcare plan, as waged by Americas Health Insurance Plans. This was 40% of the budget, he says.

Neither organizations filings provided a link, he added. Neither has admitted the accuracy of his report but they have not called for a correction, he said.

The ProPublica article did not mention the common practice at blue chips of providing no names of news or PR contacts on their websites.

Reporters are mostly confronted with a blank box where they can post a question and hope for an answer.

Some sites require reporters to answer ten questions or so on who there are, what organizations they represent, and what is the purpose of their inquiries.

Finding the top PR person at a blue chip can take much work. Theres almost no chance of reaching him or her via a phone call or e-mail. The only route open is regular snail mail.