WPP, still the pride of Ireland but soon to be headed for that U.K. tax-haven, has literally crushed the annual reports of Omnicom and Interpublic. 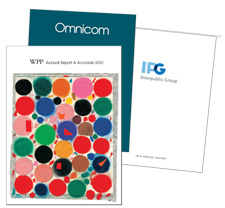 Readers of the WPP epic are in for a treat, especially the 23-page essay penned by CEO Sir Martin Sorrell entitled the The U.S. and Traditional Media Bite Back. [Did you know that China and India accounted for 49 percent of worldwide GNP in 1820? After bottoming out at eight percent of global GNP in 1973, China and India are expected to be back at the 50 percent mark in 2025. Thanks for that nugget, Sir. Martin.]

Adman Sorrell gives a huge shout-out to PR and PA because good editorial cannot be bought, only influenced making those disciplines more vital. In the world of blogs and social networks, PR possesses influence that paid-for advertising cannot.

PR will never replace traditional advertising but in a new electronic media, it is a measurable way of building a brand. Chinese and Indian manufacturers will need its services to bring their products to the West, as they go beyond being makers of cheap generic goods to creators of value-added brands. Equally, burgeoning global powers will need PR to smooth their ways to places of influence in the world. And the financial institutions blamed for the credit crunch will need to buff up their tarnished reputations.

One downer: there is not one image of Sorrell. You are too modest, Sir.