D.C. PR firm Story Partners is helping to organize a May 10 capital benefit for Alabama victims of tornadoes that ravaged the south late last month. 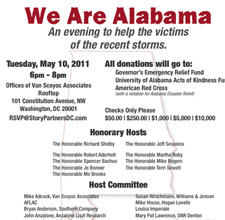 The charity event is slated for the rooftop of Van Scoyoc Associates on Constitution Avenue and includes among its honorary hosts, Sen. Jeff Sessions and Sen. Richard Shelby (Rs-Ala.), as well as members of the states House delegation.

Alabama was hit the hardest of six states ravaged by tornadoes that left more than 330 dead, 230 in the Yellowhammer State. Damages are expected to exceed $2 billion there, Reuters reported this week.

In addition to VSA and SP, other hosts hail from the U.S. Chamber of Commerce, Crossroads Strategies, Wexler-Walker and the Distilled Spirits Council of the U.S.