Mark Penn, Hillary Clintons pollster and Burson-Marsteller CEO, doesnt expect to be the fall guy when the New York Senator finally faces reality and call it quits. He made that point in an off-the-record about the campaign interview published today on the website of The Guardian. 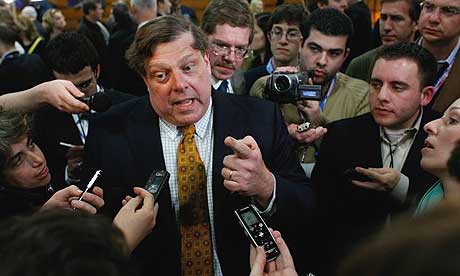 Oliver Burkeman chatted with Penn in his gleaming top-floor office at B-Ms Washington headquarters. Penns understanding of the sessions purpose was to talk about the paperback release of Microtrends in which the pollster slices and dices Americans into tiny pieces. That concept fell short on the campaign trail especially during a time when a large chunk of Democratic and independent voters want dramatic change from the past eight years of George Bush and the Republicans. Or as Barack Obamas camp so aptly puts it: Change We Can Believe In.

Burkeman managed to squeeze some Clinton-related comments from Penn, whom he describes as a portly 53-year-old. The pollster denies that Clintons campaign was based on the pages of Microtrends. Penn brands Hillarys call to end the Iraq war (one that she voted for) and healthcare reform big ideas. In Penns mind, Clinton ran a campaign that was a balanced one between big ideas and small targeted proposals.

When asked why he did not take a sabbatical from B-M, Penn admits he might have done things differently with the benefits of hindsight. Penn, however, is not going to stand for cheap shots about Clintons campaign ranking among the worst ever.

Clinton, the one-time front-runner, allowed a largely unknown freshman Senator to snatch her crown. Obama beat Clinton because of a strong grassroots campaign that recorded 10 straight victories before Hillary regained footing in Texas and Ohio.

Clinton surely gained momentum during the endgame in Pennsylvania, West Virginia, Kentucky and Puerto Rico but it was her earlier no-show efforts to win delegates in places like Wisconsin, Washington and Virginia that did her in.

Penn reportedly assumed Clinton would have wrapped it up by clinching California on Super Tuesday back in February. As he told Burkeman: There is always, in everything, something that could have been done differently.

He must be referring to the campaigns plan of writing off a big chunk of the electorate in anticipation of the eventual Clinton Coronation, an event that is now on hold unless Penns arch rival Harold Ickes can strong-arm super delegates to vote for Clinton.