Five investigative journalism pieces are up for the top award in the Reporting category of the American Society of Magazine Editors Monday night in New York. 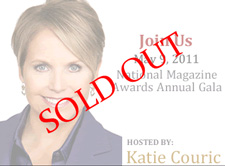 The sold-out event, taking place at 583 Park ave., an event space formerly owned by a church, will be hosted by outgoing CBS News anchor Katie Couric.

The five journalists and their pieces are:

The Guantanamo Suicides by Scott Horton, which appeared in the March Harpers Magazine.

The Desert War, about the revolt in Yemen by Robert Worth, New York Times Magazine.

Covert Operations by Jane Mayer who profiled the political activities of the billionaire Koch Brothers for The New Yorker.

The Runaway General, a story in Rolling Stone by Michael Hastings that led to the resignation of General Stanley McChrystal

Digging Out, an essay and photos by Elliott Woods about the rich store of minerals in Afghanistan that appeared in the Virginia Quarterly Review.

Links to the above stories are also on the ASME website.

This will be the first time that the ASME has presented the awards at a dinner.

Sid Holt, CEO, singled out the Hastings and Mayer articles as journalism that made news while covering the news. Other articles, including those that focused on the failure of the criminal justice system, the impact of autism, and conflicts around the globe, made for an extraordinary year for magazines, he said.

Tom Wolfe, described as a founder of the New Journalism, whose books The Right Stuff and The Bonfire of the Vanities started out as magazine series, will receive a Creative Excellence Award.

New Yorker writers are up for nine awards.

The awards were established in 1966 and are sponsored in association with the Columbia University Graduate School of Journalism. Nearly 270 publications entered this year, submitting 1,673 entries.