After ten years of a fruitless manhunt for Osama bin Laden, one would think the Obama administration would have gotten a big thumbs-up for hunting down the mastermind of the biggest terror attack in U.S. history.

Instead, the focus is on PR flubs. How trite! 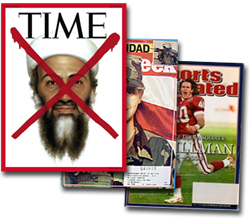 Though Osama isnt even fish food yet, armchair media quarterbacks are bashing the Pentagon for the evolving narrative of the Pakistan raid. Some demand photos of the badly disfigured Osama, who took a bullet in the skull, leaving part of his brain jutting from his head.

Wouldn't that be a grand propaganda tool for radical Islam?

Pentagon tall tale-tellers seized on the rescue from a hospital of the 19-year-old West Virginia soldier Lynch, who was injured when her Humvee flipped in Iraq, to try to build support for a war that the U.S. should never have fought. Lynch was said to have gone done with guns blazing. She was hailed as the first American POW rescued since WWI, and the first woman-ever.

Lynch was inundated with gifts, subject of an aggressive media campaign and star of of a fawning book, "I Am A Soldier Too: The Jessica Lynch Story," written by Pulitzer Prize-winning journalist Rick Bragg. Commendably, Lynch finally set the record straight.

The Tillman spin job was a flat-out cover-up by Army brass determined to squash the truth that the former National Football League star was killed by one of our own.

The sagas of Lynch and Tillman were well-thought PR schemes designed to hoodwink the American public.

The Navy Seal operation in Abbottabad was conducted less than five days ago in the heart of enemy territory. Of course, confusion could be expected over what actually went down. A cover-up though, it isnt.

The story has gone from intense firefight to the shooting of an unarmed Osama, though two rifles were reportedly in arms reach.

Liberal blowhards like filmmaker Michael Moore (full disclosure: I like Mike), talk of the execution of bin Laden. Talk is very cheap, especially when one is a half world away from the site of the Osama shooting.

In my book, I value the judgment of the highly trained Navy Seal team that was in the darkened room with Osama 1,000 times more than the opinions of Moore and his ilk. The truth will soon be out after a de-briefing by the Seals who performed their duty.

Meanwhile, the U.S. received an unexpected show of support for the death of Osama from the Dalai Lama, the global symbol of non-violence. At the University of Southern California, the Dalai Lama said: Forgiveness doesnt mean forget what happened. If something is serious and it is necessary to take countermeasures, you have to take countermeasures.