Admit it, you missed them. Not to worry.

With all due respect to President Obamas cabinet, the current group is a bunch of stiffs (excluding Hillary) compared to the Team of Rivals masterfully assembled by President Bush II. [Apologies go to Doris Kearns, whose Team of Rivals book profiled the legends put together by President Lincoln.] 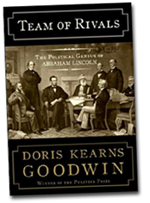 While Bush II turned down President Obamas gracious invitation to appear the Ground Zero memorial last week, his top White House aides have been strutting their stuff all over MediaLand.

Former Vice President Dick Cheney and Secretary of Defense Donald Rumsfeld provided warrior bona-fides to Obama during yesterdays TV gabfests. Wimp, no more, they said in praising Rambo Barack's okay of the raid on Osama bin Ladens lair. Cheney on Fox News gave Obama high marks, while Rummy told CBSs Face the Nation that he doesnt give a fig about what Pakistan thinks about the U.S. military strike on its own turf.

Secrecy, of course, is Cheneys strong suit. Remember the national uproar over his secret meetings with Big Oil execs to hammer out a national energy policy in those long-ago days before 9/11, when issues like Terri Schiavo drove the White House agenda.

In the good news for Obamas re-election department: Cheney and Rumsfeld part ways with him on waterboarding and other enhanced interrogation techniques (e.g., torture) that were so-favored by Team Bush.

Ex-Secretary of State Condoleeza Rice used the New York Times Magazine (April 26) to respond to Rumsfelds characterization of her as the lightweight in the White House. In his Known and Unknown (and largely unread) memoir, Rummy ripped Rices modest experience in the federal government and management.

Rice told the Times: I dont know what Don was trying to say, and it really doesnt matter. Don can be a grump guy. We all know that. Touche. Condi has potential.

And then there was a May 4 news bulletin that Bushs Justice Dept. chief John Ashcroft is heading the former Blackwaters new subcommittee of governance. He will make sure that the renamed Xe Services will maximize governance, compliance and accountability and promote the highest degrees of ethics and professionalism within the private-security industry.

Blackwater was one of the many lowlights of the Bush era. It is forever tarnished for shooting unarmed civilians in Baghdad, which led to its ultimate expulsion from that country.

The revamped security firm should take the extra step and add Rice to its menua of advisors. It was Condi who apologized to Iraqs Government for Blackwaters massacre. By retaining Rice, Xe would bring a measure of closure to the sordid episode, and re-unite two key members of the never-to-be-forgotten Bush II White House.

Can Dick and Rummy be far behind?