Peabody Energy is the latest target of a PR spoof campaign as an effort launched today touted a phony public health campaign attributed to the energy company dubbed Coal Cares. 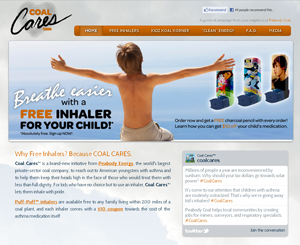 The campaign purports to donate free asthma inhalers to children living within 200 miles of a coal plant in a bid to boost esteem of children with the bronchial disease. The inhalers are said to be branded with popular characters and kids idols like Batman and Justin Bieber.

Meg Gallagher, director of communications for Peabody, told ODwyers that the campaign launched today is a spoof.

The site is in fact a hoax, making inaccurate claims about Peabody and coal, she said, noting Peabody was considering a statement about the episode. [Update: link to statement]

The Coal Cares website includes a realistic-looking press release announcing the campaign with quotes from Peabody CEO Gregory Boyce. By re-branding the inhaler as a cool, individualized, must-have accessory, Coal Cares will empower children to tell bullies: suck it up, he said in the fake release.

The satirical campaign is in line with past efforts by The Yes Men, which last month targeted GE with a phony press release picked up by some media. No group has claimed ownership of the Peabody spoof, however.