In a brilliant bit of guerrilla marketing, the gang at Sprint seeks to cash in on the popularity of the T-Mobile ad that features beautiful Canadian spokesmodel Carly Foulkes, who took over that spot from Catherine Zeta-Jones.

The knock-off is its latest salvo to thwart AT&Ts $39B takeover of T-Mobile. 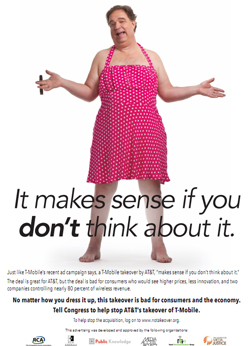 Attired in her signature pink-hued frock, wholesome and sexy Foulkes calmy picks apart an array of male clods who are customers of T-Mobile's wireless competitors.

The latest ad is the monthly mugging of a wireless customer by corporate goons who hold him upside down and shake him until all the change falls out of his pockets.

The poor sap, suggests Foulkes, should switch to T-Mobiles unlimited $79 monthly talk, text and data plan to save $350 yearly from the tab of AT&T, Verizon and Sprint.

That ad will obviously be re-jiggered if T-Mobiles marriage to Ma Ball takes place.

The Sprint ad features an overweight, middle-aged cross-dressing guy with cigar in hand. He is no Foulkes look-a-like.

No matter how you dress it up, this takeover is bad for consumers and the economy, reads the copy of the ad from Sprint and allies including Media Access Project, Center for Media Justice, Rural Telecommunications Group, Public Knowledge, New America Foundation and Rural Cellular Assn. Tell Congress to help stop AT&Ts takeover of T-Mobile, they add.

The Sprint spoof works, but hardly breaks ground. It follows the footsteps of T-Mobile. Its Foulkes spot is a knock-off of the Apple "Im a PC. Im a Mac" ad, which pitted the cool guy vs. the nerd.

One of those ads had Brazilian supermodel Gisele Bundchen as a Mac "home movie" vs. a middle-aged overweight cross-dresser who was the PC's version.