Harper's magazine and writer Scott Horton took the top prize in the Reporting category of the American Society of Magazine Editors May 9 in New York for his expose of prisoner conditions at the Guantanamo Naval Base in Cuba.

Hortons article, The Guantanamo Suicides, written with the help of whistle-blower Sgt. Joe Hickman, questioned whether three violent deaths at the prison in 2006 were suicides. 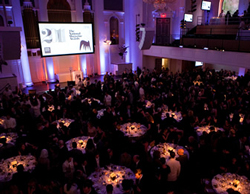 Horton detailed torture and alleged mistreatment of the 200 prisoners at the base. The finding of suicides remains as officials have chosen the expedience of political silence, wrote Horton.

Also up for an award in the Reporting category were Jane Mayers article in the New Yorker about the Koch brothers titled, Covert Operations: The Billionaire Brothers Who are Waging a War Against Obama, and The Runaway General, an article by Michael Hastings in Rolling Stone.

General Stanley McChrystals candid remarks in Hastings presence resulted in his removal at head of the war in Afghanistan.

New York Post media columnist Keith Kelly had revealed that a lawyer for David and Charles Koch had written to ASME saying that no award should go to Mayer because her article was ideologically slanted and agenda-driven.

Two Ellies each went to the Los Angeles, New York and New York Times magazines and to National Geographic, which won Magazine of the Year for having the best digital and print editions.

NG won for Best Single Topic Issue for its Water: Our Thirsty World.

The cream of the magazine industry was on display but the proceedings were marred by too many speeches that were too long, causing the event to go well past 11 p.m.

The Wrap called the night excruciatingly long and after one particularly long speech, host Katie Couric said, No offense, but now I know why none of you guys went into television.

Two of his books, "The Right Stuff" and "The Bonfire of the Vanities," started out as magazine series.

The New Yorker had nine nominations but won only one Ellie -- for public interest.

Vanity Fair columnist Christopher Hitchens, who is undergoing treatment for cancer, won for a series of columns on his illness.
Wolfe said that most investigative reporting is coming from the print side of media rather than broadcast.

NEWS AND DOCUMENTARY PHOTOGRAPHY
The New York Times Magazine
Gerald Marzorati, Editor-in-Chief
For The Shrine Down the Hall, photographs by Ashley Gilbertson; essay by Dexter Filkins