A full page color ad on the back page of the first section of the May 12 New York Times marked the launch of a new campaign by soda/fruit juice marketers aimed at convincing Americans that it is doing all it can to warn them about the high sugar content in their products.

The ad shows the index fingers of four hands pointing at a soda can with 150 calories per can on the front of the can. 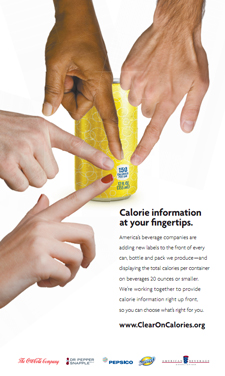 This ploy is not going to cut any ice with health authorities.

Harold Goldstein, executive director of the California Center for Public Health Advocacy, called the ad a continued public relations strategy that will do nothing to help Americans live healthier lives.

He said Its time for the beverage industry to come clean and tell consumers about the mounds of sugar in their liquid candy.
Teaspoons Easily Understood

We agree. Whats needed on the front of all high-sugar beverages, including fruit drinks, is an expression of the amount of calories in terms of number of teaspoons of sugar.

Visitors to this website voted nearly four-to-one in a poll last week in favor of using teaspoons as such a measurement in addition to grams and calories.

All consumers, and especially the children and teenagers who are a main target of soda marketing, can understand teaspoons.

One health website asks: Would you put ten teaspoons of sugar in your coffee?

A 12-ounce can of Pepsi has 150 calories or ten teaspoons of sugar. Another measurement on the back of the can is that it contains 41 grams of sugar. There are four grams of sugar in each teaspoon.

New York Mayor Michael Bloomberg is asking the Dept. of Agriculture to ban the use of food stamps for the purchase of sugary drinks. There are now a record 41 million Americans who receive food stamps.

New York Gov. David Patterson last year proposed a cent-an-ounce tax on sodas but fierce opposition from the industry forced him to remove the proposal from the budget before it was discussed or voted on.

A similar proposal has been made in California but passage is being blocked by a Republican majority in the Assembly.

Among signers of the NYT ad is SunnyD, whose orange soda has 179 calories or 11.9 teaspoons of sugar per 12 ounce can.

Other signers are Coca-Cola, Dr Pepper/Snapple, PepsiCo and the American Beverage Assn.

Four of the five biggest sellers at Pepsi are high-sugar brandsregular Pepsi-Cola with retail sales of $22 billion; Mountain Dew with about $8B sales; Gatorade (renamed G) with about $7B, and Tropicana Beverages, with about $6B.

Tropicana orange juice has more sugar than sodas165 calories per 12 ounces or 11 teaspoons of sugar.

Diet Pepsi has about $6B in retail sales according to a chart in the 2010 Pepsi annual report.

Nutritionists advise dieters to avoid any fruit drinks because of their high sugar content and lack of fiber. Fruits in their original state should be consumed, they say.

The no pulp Tropicana carton says, Not a significant source of dietary fiber.

Without such fiber, much of the sugar in such a drink cannot be metabolized quickly and turns into fat.

Spokespeople say that obesity causes as many, if not more, deaths than smoking.

No names of PR pros are available in the press rooms of either companys website. Clyde Tuggle is SVP of global PA and communications of Coke and recently appointed Tim Cost is executive VP of global corporate affairs of Pepsi.

Ray Crockett, the last public face of Coke PR, who headed North American press relations, retired last summer. He had served as an appointee by Rhoda Weiss on the 2007 board of PR Society of America.

Both Coke and Pepsi have active social responsibility PR programs under way.