The name of David H. Koch on the Lincoln Center theater where the New York City Ballet and Opera perform, served as a flashpoint for a public protest last week, confirming this blogger's view that the Koch name is "too political" to be on a public building.

About 1,000 people gathered in front of the theater on May 11, the ballet's opening night, to protest the Koch name. 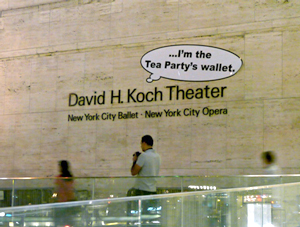 A large sticker was placed on the theater's wall above the name with the inscription, "I'm the Tea Party's Wallet."

Promoters of the event, who host the website, www.kochbrothers exposed.com, provided a live marching band, sang songs, and gave out popcorn.

Goal of the protesters is renaming the theater.

A film exposing the alleged abuses of David and Charles Koch was projected on an outside wall of the theater. David is the richest person in New York City, according to Forbes magazine. He gave $100 million to refurbish the theater in 2008 and later gave $2.5M to the ballet company itself.

NYCB, despite the gift, faces a $6 million budget shortfall this year. Dancers received no pay increase last year and will get a 2.5% hike this year.

The New York Times and New York Post did not report the incident.

The Koch Brothers, whose political activities were described by Jane Mayer in the New Yorker, are accused by the protesters of "representing the worst of the corrosive elements that have turned our democracy into a pay-to-play system of government -- a system where the corporate elite are able to continuously extend their power, wealth and influence while the majority of citizens are relegated further and further to the margins."

The group says the brothers have funded the "Tea Party which has become the tip of a right wing spear that will never stop seeking tax cuts for the rich."

Praised in the group's website are the activities of George Soros, a billionaire who has supported liberal causes and Democratic candidates.


'Political' Gifts May Be Taxed

Political gifts of donors like the Kochs and Soros, which have escaped taxation, may no longer be able to do so under a new initiative of the Internal Revenue Service.

The IRS has sent letters to five such donors, who were not identified, saying their gifts to politically active foundations may be taxed if they exceeded legal limits.

Such donors have "proliferated and funneled vast sums of money in support of campaigns and causes without having to publicly disclose themselves," said a New York Times story May 13.

The Koch and Soros camps were contacted by the NYT but neither would confirm that they had received such letters from the IRS.

The Kochs have been involved with a number of political entities including the conservative "Americans for Prosperity" while Soros has given "more than $12 million" to liberal advocacy groups like Priorities USA Action, said the NYT. 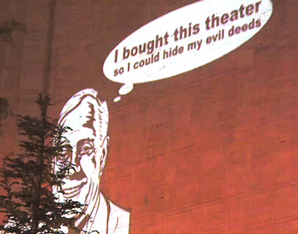 Companies and individuals can contribute to non-profit groups registered under 501/c/4 of the tax code but the primary purpose of such groups cannot be political.

The Citizens United vs. the Federal Election Committee 2010 Supreme Court decision allows companies and unions to spend without limit in elections.


Rally Planned for Today in D.C.

"National People's Action" and other groups said they will conduct a rally today at McPherson sq. at 1450 K St. N.W. to protest the activities of 'Big Banks' lobbyists."

Slogan of the group is, "We want our Democracy Back."

Members say "two percent" of the population has too much money and power and what matters is "the other 98% of real people who are no longer silent."

Labeled as a "Facebook event," supporters are asked to e-mail [email protected]