The International Monetary Fund remains fully functioning and operational, says a reassuring statement from Caroline Atkinson, director of external relations at the Washington-based arbiter of the fate of people living in Ireland, Portugal, and Greece. 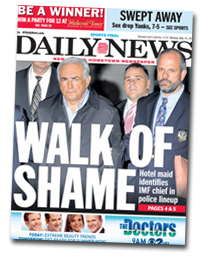 What a sigh of relief!

Its good to know that the arrest of IMF managing director Dominque Strauss-Khan in the first-class section of an Air France jet set to take off from New Yorks JFK Airport did not wreck the worlds financial system. He was cuffed by New Yorks Finest and escorted on a perp walk for allegedly raping a chambermaid at his $3,000 a-night suite at the Sofitel New York.

The IMFs May 15 statement on the arrest of its big cheese ran a skimpy 46 words. Thats 300 less than one put out today about the conclusion of its mission to the Solomon Islands. The quick takeaway: it went well. [Full Disclosure: I'm a big fan of the Solomon Islands.]

Manhattan Criminal Court Judge Melissa Jackson today denied bail to the fingered Frenchman (France and the U.S. do not have an extradition treaty) and noted that DSK already had been stopped at an airport. Assistant District Attorney John McConnell said that there is information that DSK engaged in conduct similar to what is alleged in this complaint on at least one other occasion.

His office is probing that incident.

The arrest of DSK, who was supposed to throw his hat into the ring in the race to succeed French President Nicolas Sarkozy, is a blow to the IMF.

The Wall Street Journal calls it a black mark on the IMF that chose to overlook DSKs previous sexual adventures. The IMF, in 2007, gave DSK a wrist slap after a dumped husband blew the whistle on a affair the then newly minted managing director was having with his wife. The Funds board determined that DSK committed a serious of judgment.

The Journal pointed out that IMFs sister organizationWorld Bankgave its then-President Paul Wolfowitz the boot after news broke that he helped get a raise for his girlfriend.

There is no question that Atkinson is going to be in the spotlight during a trial that could put her boss in the slammer for 25 years. The former reporter for the Economist, Washington Post and Times of London is going to have to expand beyond her message of keep calm and carry on.