There is a silver lining in Donald Trumps not-so-bombshell decision to forgo a run at President Obama in return for collecting a cool $30M from NBC for another season of Celebrity Apprentice. 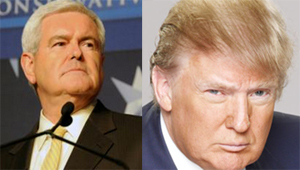 The Donald promised to continue to voice my opinions loudly and help shape politicians thoughts. After a couple of previous tease presidential campaigns, Trump finally realized that his greatest asset (among thousands) is to bring important economic and foreign policy issues to the forefront of the national dialogue.

The nation will be blessed with future gems from Trump like seizing Libya/Iraq/Irans oil fields and waging economic war with China. On his April swing through New Hampshire, Trump said China is raping this country and stealing Americas jobs because their leaders are smarter than ours.

A Trump presidency was supposed to tip the brainpower in Americas favor.

Now that Trump is repositioning as Americas Advisor-in-Chief, Newt Gingrich steps into the role as the prime entertainment among the ranks of GOP candidates (Mike Huckabee had potential to challenge Gingrich).

The former House speaker is off to a good start with todays news that he and third wife, Callista, may be on the hook for a half-million dollar bill at Tiffanys. That wont play well in the GOP heartland.

His swipe at Private Paul Ryans effort to destroy Medicare also generated rave reviews. Gingrich to House GOP: Drop Dead screamed the lead editorial of todays Wall Street Journal, which reminded its tender readers that the former Congressman from Georgia once called President Obamas secular socialist machine something that poses as great a threat to America as Nazi Germany to the Soviet Union once did.