Walt Disney Co. is taking some heat for its crafty decision to file trademark applications for Seal Team 6 two days after that elite team fired a bullet into the head of Osama bin Laden. 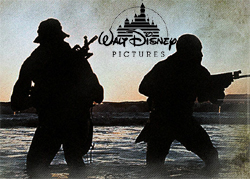 Some snoots rap Disneys move as tasteless and seeking to cash-in on the U.S. war on terror. Disney, instead, should be applauded for living up to the true spirit of American capitalism.

Disney filed applications for use of Seal Team 6 in a variety of ways including entertainment, toys, clothing, playthings, snow globes and Christmas tree ornaments. Tip for Disney: forget the bin Laden ornaments.

The U.S. Patent and Trademark Office says it can take as little as three months for trademark approval depending upon whether there are any complaints raised about an application. The Navy is reportedly looking into the Disney filings.

The service should do everything in its power to encourage Disneys development of Seal 6 properties. What a marvelous recruiting tool for the military! The Navy rejects the vast majority of those who attempt to survive Seal training school. Disneys marketing prowess would greatly increase the pool of Seal applicants. Future graduates will be even more fit and deadly efficient than the current corps of Seals.

The Navy and Disney have a long-standing relationship. The Navy was the first of Americas military services to approach Disney during WWII. It asked for instructional film to educate sailors about navigation tactics, according to Wikipedia. The Navy requested more than 900,000 feet of film during a three-month period from a studio that was creating 28,000 feet of film a year.

The Seals also would greatly enhance the Disney Store experience. When my daughters were young, this blogger spent many hours in Disney stores. Merchandise definitely skewered toward girls. A line of Seal Team action figures and equipment would capture the attention of boys and keep them out of trouble. The geniuses at Disney may even develop Sammy the Seal to join Mickey, Donald and Goofy. What a blast?

The name of Osama bin Laden means absolutely nothing to a two-year-old kid today. There will be no connection in that kids mind between Seal Team 6 and the mass murderer that the unit killed when he or she strolls into a Disney store or visits Disney World three years from now.