D.C. PR counselor Marina Ein is working with the legal team of former IMF chief Dominique Strauss-Kahn, who is under house arrest on sexual assault charges in New York. 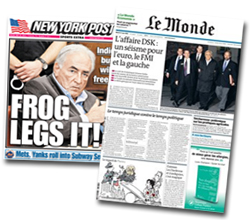 "We have a long-standing relationship with William W. Taylor III, Mr. Strauss-Kahn's attorney and we have been assisting Mr. Taylor in managing the process aspect of responding to media inquiries and issuing statements via newswires," she told O'Dwyer's.

Ein, who worked PR for former Rep. Gary Condit during the media frenzy amid the disappearance of aide Chandra Levy in 2001, runs an eponymous shop in D.C.

Ein today shot down reports that DSKs legal team has been in contact with his accuser or her family. The New York Post reported Wednesday that friends of Strauss-Kahn offered money to the accusers family in Guinea to drop the case.

Reuters reported May 23 that Strauss-Kahns legal team has reached out to D.C.-based TD International, a business consulting firm run by former CIA operatives, for counsel, as well.

Ein worked the 2004 release of Doubledays incendiary The Real Story of the Bush Dynasty by Kitty Kelly ahead of the presidential election that year.