Why can't Goldman Sachs get its PR right? 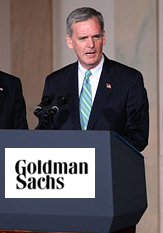 The bank announced today the Republicans new gig to provide strategic advice to the firm and its clients, and assist in business development initiatives across our global franchise.

Gregg is best remembered as the flip-flopper who accepted and then rejected an offer from the Obama administration to serve as Commerce Secretary. That offer signaled Team Obamas willingness to usher in a round of bipartisanship in D.C.

Savaged by right-wingers, Gregg wimped out. He then tore into Obamas cash for clunkers car rebate plan as a surefire loser that would turn the U.S. into a Banana Republic.

How's that for payback?

Viewing the current success of Ford, General Motors and even Chrysler, Gregg didnt have a clue. Does Goldman really need Greggs experience and insight that is cited by CEO Lloyd Blankfein in todays release? The appointment only highlights the revolving door relationship between Wall Street and Congress.

Gaddafi is an egotistical madman who hopefully will stand trial for war crimes connected with the massacre of his own people in his desperate bid to remain in power.

The colonel, however, is no sucker when it comes to high finance, according to the Wall Street Journal. His government spurned Goldmans offier to invest $3.7B to buy $5B in preferred stock. Goldman promised returns in the billions. The Libyans were promised the moon, or at least up to a 9.25 percent return for 40 years.

The Libyans, however, already lost 98 percent of a $1.3B investment fund that they placed at Goldman. Citigroup and Spains Santander bank were among "hot investments" scooped up for Libya. They spurned the opportunity to own a piece of Goldman and demanded a faster payback on the lost $1.3B. Or as the WSJ reported, They also worried about whether it was wise to invest in Goldman given the collapse of Lehman and the resulting panic that swept global financial markets.

The Libyans and Goldman tried to iron out a deal until negotations collapsed last June. The U.S. has now frozen $37B in Libyan assets, including some of the remaining funds at Goldman.

Gregg's first job: Advise Blankfein to stay away from international pariahs like Libya.